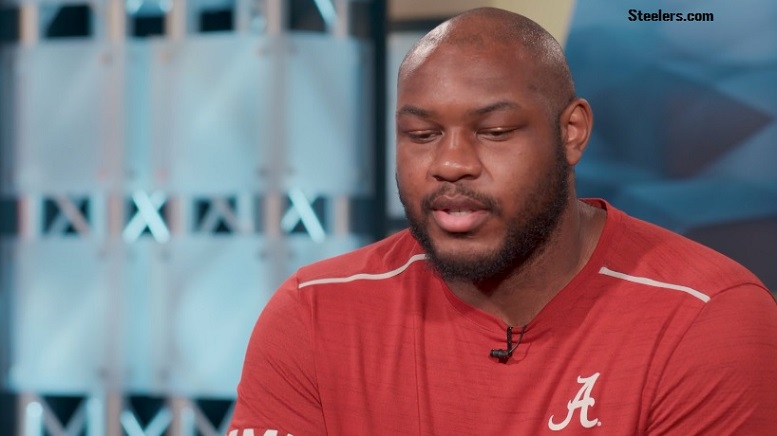 The Pittsburgh Steelers 2018 OTA sessions will get underway on Tuesday and ahead of that annual event starting, the team’s seventh-round selection this year, defensive tackle Joshua Frazier, recently discussed how he felt his rookie minicamp practices went just over a week ago.

“Rookie mini camp went well,” Frazier told Missi Matthews of steelers.com. “I went out there and just went my hardest and just took everything that I learned from Alabama to this level of football and it’s been a pretty easy transition so far.”

Frazier, who was coached by new Steelers defensive line coach Karl Dunbar last season at Alabama, was asked by Matthews if he feels like he now has an unfair advantage being as he’s already been coached by Dunbar prior to landing in Pittsburgh with the Steelers.

“No, I feel like I have an advantage knowing Coach Dunbar because I know he’s going to help me in the best capacity that he can and he’s going to be there to take care of me if I need it,” Frazier said.

The Steelers 6-3, 321-pound rookie defensive tackle also told Matthews that Dunbar is the same coach with the Steelers that he was last season at Alabama.

During his four seasons at Alabama, Frazier played in 39 total games on his way to registering 28 total tackles, 2 sacks and 3 pass breakups. He went on to tell Matthews why him playing for such a big-time college football program such as Alabama should make his transition to the NFL fairly easy.

“The coaching staff, mainly,” Frazier said. “Coach [Scott] Cochran and Coach [Karl] Dunbar and then Coach [Nick] Saban, everybody that was there, it’s just a first class program. They teach you a lot about the game and I feel that that’s going to be an advantage to me. The way that they teach football there is really how you’re supposed to play it and it showed out on the field when I was going into rookie mini camp and hopefully it shows when we get to the games and stuff like that.”

As a seventh-round draft pick Frazier is far from a lock to make the Steelers 53-man roster in 2018. With that said, however, his path to the 53-man roster this year as potentially a sixth and final defensive lineman is pretty straight forward as there should just be a few other players he’ll have to outperform the rest of the offseason with one of them being former sixth-round draft pick, defensive tackle Daniel McCullers.