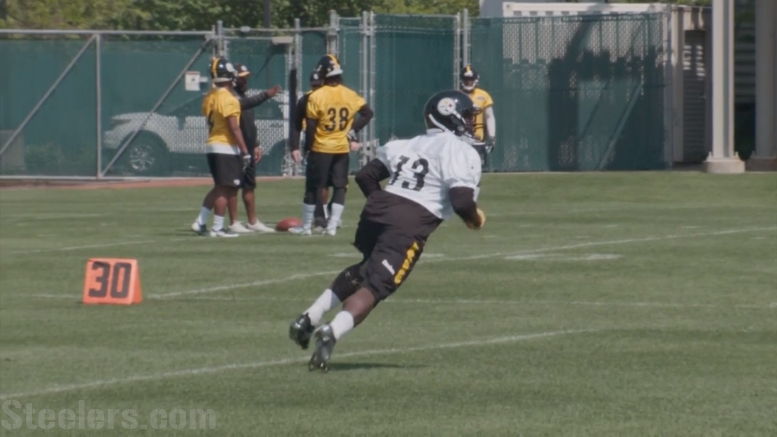 After the Pittsburgh Steelers made Oklahoma State wide receiver James Washington their selection with their second-round pick in the 2018 NFL Draft, they made some comparisons to JuJu Smith-Schuster, the wide receiver out of USC that they selected in the second round of the 2017 NFL Draft.

Both receivers are of similar height with a bigger build than after. Neither timed with elite speed yet had production at the college level performing on deep passes. Their bigger frames aided them in contested-catch scenarios, and they embraced the grind of mastering their positions through their work ethic and drive to succeed.

“Similarly to JuJu, we just loved his overall game, his physicality, his sure hands, his strong hands, his running ability after the catch”, Head Coach Mike Tomlin told reporters about the selection of Washington during his post-draft press conference.

“His resume speaks for itself, a Biletnikoff winner, we felt really fortunate for him to be available at this stage in the draft”, he continued, noting his “four-year body of work. Equally exciting, a really solid young man, you know what you’re going get on a day-to-day basis. He’s going be an early contributor for us”.

Those comments certainly recall to mind what the Steelers had to say about Smith-Schuster a year ago when he came in. His youth was an obvious point of emphasis, just 20 years old when he was drafted, though Washington is a bit older.

“He can play inside, outside. If you had to say what he excelled at, I’d say his ability to catch the ball in combative situations, 50/50 balls as we call them, and he usually comes down with them”, Todd Haley said of him a year ago. “He’s a really exciting guy and we are excited to get him here to work on”.

Of course, the Steelers are hoping that Washington and Smith-Schuster also have similarly successful rookie seasons. The latter posted 58 receptions for 917 yards and seven touchdowns a year ago in 14 games, despite not having a significant role early on.

The door is open for Washington to contribute right away after the Steelers traded Martavis Bryant. Even if they end up re-signing Eli Rogers, the rookie could play over him if he earns it. He and Smith-Schuster are not going to be the exact same player, of course, but they bear similarities.

I believe it was Randy Fichtner who also commented after the pick was made that they view Washington as a player who can play inside as a blocker in the run game, comparable to how they utilized Smith-Schuster a year ago.

It worked out the first time, so why not give it another go? They still have Antonio Brown as a different body type.