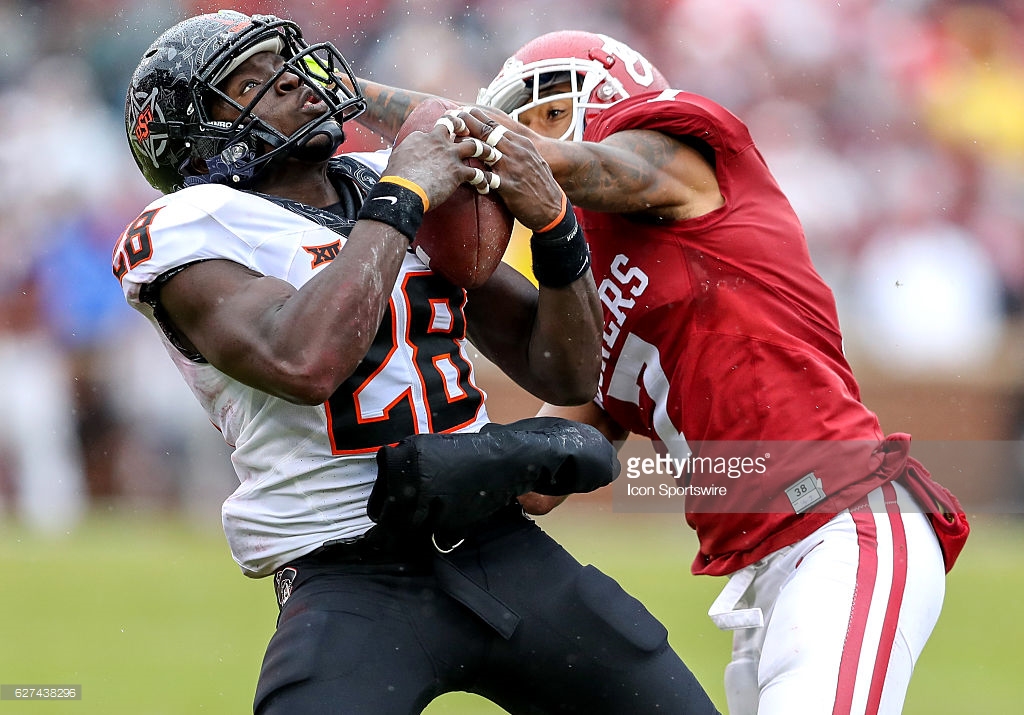 In a Thursday post I took an in-depth look at the 19 receptions that new Pittsburgh Steelers wide receiver James Washington registered during the 2017 season that resulted in gains of 25 yards or more. I did that study in order to see how far down the field he was catching the football on average on those plays. The results were quite surprising and encouraging. So, was that 2017 season just an anomaly? I looked at all 19 of his big play receptions from his 2016 season at Oklahoma State just to make sure.

Below is the same breakdown I did for Washington’s 2017 big play receptions only this time I have used his 19 big play receptions from the 2016 season. While Washington’s average reception distance for these 19 big plays from 2016 was a little bit less than his 2017 average (34.4 yards), it still comes in at 27.4 yards past the original line of scrimmage and for that many plays it’s once again quite impressive. In fact, 11 of these 19 receptions listed below included Washington catching the football more than 25 yards past the original line of scrimmage.

Something I didn’t see when studying Washington 2017 big play receptions that I do see in his 2016 big plays is him catching some passes within 10 yards from the original line of scrimmage via either quick slants or screens and turning them into gains of 25 yards or more. He had five such receptions in 2016 so that’s encouraging from the standpoint of that he’s not just a deep pass big play producer. I was hoping to see a few of these ahead of studying them.

One thing that stuck out while studying Washington’s 2017 big plays is that all of them came with him lined up on the right side of the formation and I noted that in the previous post. That also held true for all 19 of his 2016 big plays so that’s now something he’ll certainly need to work on with the Steelers as he’ll need to be able to produce big plays and run routes on the left side in Pittsburgh.

Another thing that stuck out once again is that most of Washington’s big play receptions in 2016 came on either first or second downs. That’s not overly alarming, but just something that needs to be dug deeper into. Was he just not targeted deep on third downs much in 2016 and 2017, or did he just fail to make big receptions deep down the field on that down. You can bet I will be researching that as I move forward with my study of him.

With two full seasons of Washington’s big play college receptions now studied, there’s really no reason to breakdown his first two seasons at Oklahoma State when it comes to that aspect of his game. We can now conclude that Washington should be able to produce deep catches down the field at the NFL level and specifically when lined up on the right side.

I’ll have more on Washington’s college career at Oklahoma State in future posts.