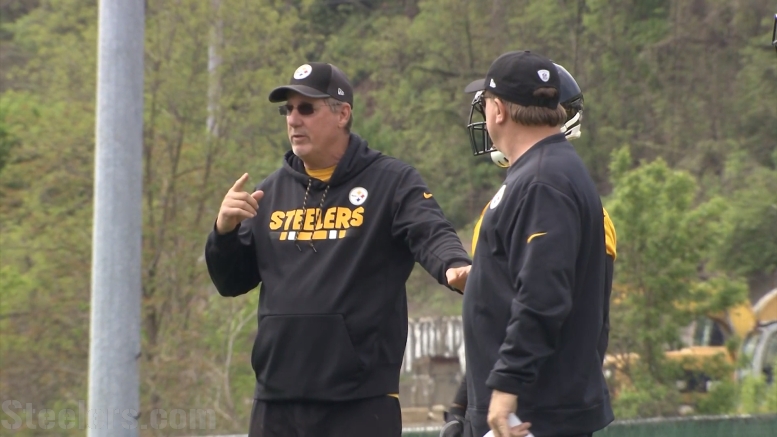 When it comes to getting the players’ perspective on a new coach, there’s a world of difference between the opinion of a rookie who has never stepped on an NFL practice field before and a veteran who has already been a starter in the league.

So while it was nice to hear from the Pittsburgh Steelers’ two rookie safeties of how much they were already liking the team’s new defensive backs coach, it was even more of a comfort when we got our first opportunity to hear from one of their veteran defensive backs about first-year coach Tom Bradley.

While he may be in his first season among the professional ranks, Bradley is actually one of the more experienced coached on the staff, having an extensive resume in a varieties of roles at the college level. The Steelers hired him earlier this offseason to replace Carnell Lake, who resigned his post after seven seasons with the team.

Tuesday was his first taste of one-field work with the team’s full 90-man roster, rather than just with the young guys during rookie minicamp. Starting safety Sean Davis told Chris Adamski after practice that he had already come away impressed with the new guy.

“I like Coach Bradley. He’s a real smart guy”, he said. “It’s crazy, he already knew me in and out on my first day of meeting him. So I think he’s a real film-heavy guy, and I like that”. rookie safeties Terrell Edmunds and Marcus Allen also commented on his detail-oriented nature, and, of course, he had a hand in evaluating these defensive backs as draft prospects.

“I like coach Bradley. He’s a real smart guy… It’s crazy, he already knew me in and out on my first day of meeting him. So I think he’s a real film-heavy guy, and I like that.”

These comments from Davis actually recall to mind a story that All-Pro safety John Lynch once told of Steelers Head Coach Mike Tomlin when he first came on the job with the Tampa Bay Buccaneers as a young defensive backs coach.

Lynch was already an accomplished player at the time, yet on the first day of meeting him, Tomlin had already compiled a list of all the little nuances in his game that he could work on to improve. The veteran was bemused and a little insulted by the bravado of the young coach—until he realized that his observations were right.

Now, Bradley is no neophyte as Tomlin was at the time, and Davis is certainly not nearly the accomplished performer that Lynch was even at that stage of his career, but it’s a similarity in approach worth pointing out, given that Tomlin was responsible for hiring Bradley, and in fact even specifically sought him out.

And he will be dealing with a pretty new backfield overall during his first season on the job, with Davis the only safety to return from a year ago. None of the defensive backs have been with the team for more than two seasons, even if a couple of them are veterans who have been recently added in free agency.