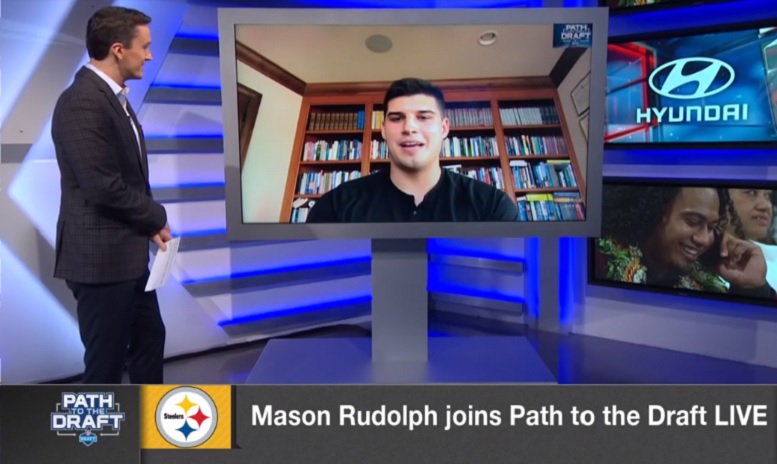 Pittsburgh Steelers quarterback Ben Roethlisberger has had quite a bit to say recently about the team selecting former Oklahoma State quarterback Mason Rudolph in the third-round of the 2018 NFL Draft and a few of his comments centered around him essentially saying that the new signal-caller might have to wait a long time before he becomes the starter. During a recent interview on “Path to the Draft” on the NFL Network, Rudolph was given a chance to respond to Roethlisberger’s comments that in a perfect world the newest Pittsburgh quarterback will have a long wait.

“Yeah, if I was Ben, I’d probably say the same thing,” Rudolph said. “You know, he’s a competitor. Obviously, he has a lot of confidence in himself, like I do and yeah, he’s going to be a future Hall of Famer and I would expect him to say that. So, you know, I’m just looking forward to going in there and learning the system, competing, raising my level of play, preparing like I’m the starter even though obviously I won’t be the starter. And just waiting and being prepared for whenever I get my time. Whenever my time comes, to be ready and take advantage of it.”

That’s a very sensible response from Rudolph, all things considered. According to Roethlisberger’s most-recent interview he said he has yet to met Rudolph, so it will be interesting to hear how that initial face-to-face introduction goes down.

“I have not talked to him yet. I don’t think they’re in town yet,” Roethlisberger said Friday.

Earlier during the Rudolph’s most-recent television interview he was asked to rate his new teammates in Pittsburgh.

“Unbelievable, I think if it’s not the most-talented, it’s one of the top two and not only the guys that are already there, but the guys like James Washington they’re going to add to that group and obviously myself at some point,” Rudolph said. “So, proud to be a Steeler, proud to be part of this organization, just an unbelievable way they’ve run it. The reputation they have for so long and I’m looking forward to kind of getting to work.”

Rudolph will finally get to work on the field with some of his new teammates next weekend when the Steelers hold their annual rookie minicamp in Pittsburgh. One of those teammates will be wide receiver James Washington, who Rudolph played with for four seasons at Oklahoma State. Because of that, Rudolph was asked what his conversations with Washington have been like since they both were drafted by the Steelers just over a week ago.

“Yeah, I called him immediately after and we facetime,” Rudolph said. “We talked and just how unbelievable it was. It didn’t even dawn on me really until we were watching NFL Network and somebody was talking about it and I was like, that’s right, I am going to play with James. So, pretty unbelievable. Obviously, we had a pretty great connection and chemistry in college and hope to just kinda keep that moving into the next level.”

If it’s left totally up to Roethlisberger right now, he’ll be the one connecting with Washington for at least the next three to five seasons with Rudolph standing on the Steelers sideline watching it happen. For now, however, Rudolph should definitely get a chance to connect with Washington next weekend as Roethlisberger won’t be on the field while the rookie minicamp practices take place.