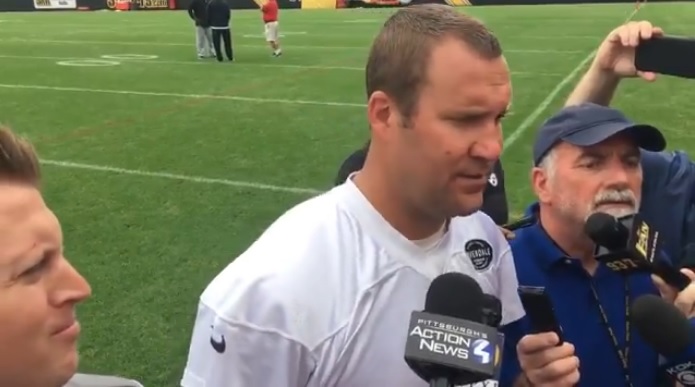 Yes, it is the saga that will never end. Speaking to the media for the first time since his controversial statements about the Pittsburgh Steelers selecting Mason Rudolph, Ben Roethlisberger is telling everyone to R-E-L-A-X.

“I think people took some things into a context that I was going to be mean or rude,” Roethlisberger told a group of reporters following practice. “And that was not it at all. If you listen to the whole conversation, I said it in jest and we were laughing and having fun. I’ve never been the type to be rude or be mean to other quarterbacks. You can ask other quarterbacks. Jones, I’ve had a lot of quarterbacks through here that were younger than me that I’ve tried to help in any way that I can.”

Ben Roethlisberger said he helped Mason Rudolph on a throw in Tuesday’s workout, believes his radio comments about the rookie were framed in the wrong context. Never intended to be mean. pic.twitter.com/ehk9P0TQGa

And to be perfectly fair, Roethlisberger is 100% right. One quote that got national attention was the one where he said he wouldn’t answer Rudolph’s questions and just point to the playbook. On paper, without hearing it, that looks almost sinister. But in context, Roethlisberger was clearly joking and anyone listening knew it.

Although Roethlisberger shot Rudolph a “good luck” text before rookie minicamp, today was their first day working together. And according to Roethlisberger, he helped the rookie out as much as he could. Like on this throw from Rudolph, according to the Trib’s Joe Rutter.

Roethlisberger said he offered Mason Rudolph advice after a high throw he made to FB Rosie Nix. "You''ll learn quickly that every throw doesn't have to be the hardest throw you can make. You don't have to put every throw on the chest as hard as you can."

Via Ed Bouchette, Roethlisberger gave a brief scouting report of what he saw in Rudolph.

Ben Roethlisberger's first impression of rookie QB Mason Rudolph at Steelers practice today: "He’s got a big arm. He seems to understand the offense, seems to not have any issues in the huddle, so I thought he did really well."

Other Steelers, like wide receiver Marcus Tucker during rookie minicamp, praised Rudolph’s maturity and command of the huddle, something you don’t always see in a rookie.

Hopefully, the air is cleared over Roethlisberger’s comments. Some of it definitely didn’t need to be said but the idea that Roethlisberger wasn’t going to help Rudolph or be an outright jerk to him was entirely made-up. The focus should go back to football and Roethlisberger tries to lead the Steelers to a 7th Super Bowl while Rudolph hopes to eventually take them to an 8th.