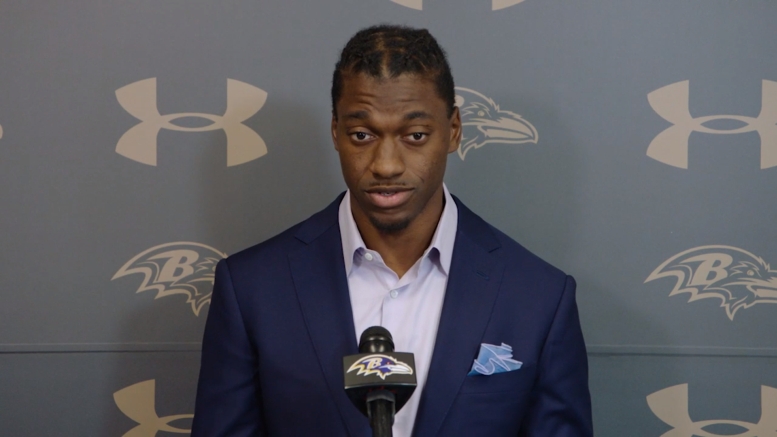 So apparently Joe Flacco wasn’t the only quarterback on the Baltimore Ravens who felt the need to be silent, and then to comment, on the fact that the team used a first-round draft pick on Lamar Jackson. Robert Griffin III, whom the Ravens signed after the first couple of waves in free agency, is looking to remain Flacco’s backup for this season.

“I didn’t look at it as a shot at me or a shot at Joe”, he recently told reporters about his reaction to the team’s decision to draft a quarterback. “It was, ‘okay, Lamar is coming in here, and it’s our job to help him learn the offense and help him compete’.

Griffin hasn’t gotten the opportunity to compete much lately. In fact, he hasn’t seen a ton of snaps over the past three years. So realistically there probably isn’t a lot he can say because he’s in a vulnerable position. The Ravens didn’t even really bring him in for a visit. They asked him to throw to some wide receivers they were looking at in free agency.

The former second-overall pick was not on a team last season at all after the Cleveland Browns released him in the middle of a two-year contract. He only started a few games in Cleveland during the 2016 season because he suffered an injury in the opener. He did end up winning one game, which is the only win the team has had in the past two years.

That is his only playing time since 2014. He was a member of the Washington Redskins before that—the team that traded up to get him second-overall—but in the final season of his contract, they kept him on the bench, not wanting to risk his getting injured and activating the guarantee in his fifth-year option. They moved forward with—and now on from—Kirk Cousins, whom they selected in the same draft class as Griffin.

And so now here finds himself here, with not much football under his belt in the past three years, clinging to a job, and his team takes quarterback in the first round. A team that, by the way, usually only keeps two quarterbacks on the 53-man roster. He knows it hurts, even though he won’t say it.

“I look at myself as an old, young . I’m 28, so I’m still young. But I’ve been around the block. I feel like the chips have been stacked against me numerous times throughout my life — not just my career”, he told reporters. “The biggest thing I learned last year was, whatever your first instinct is to do when you are faced with an obstacle, when you face a challenge in life, that’s who you are”.

Not a lot of success stories have come out of situations like Griffin’s. The odds of him resurrecting his career are quite slim. He may not even make the Ravens’ roster, and if he doesn’t, will anybody else be looking at him?