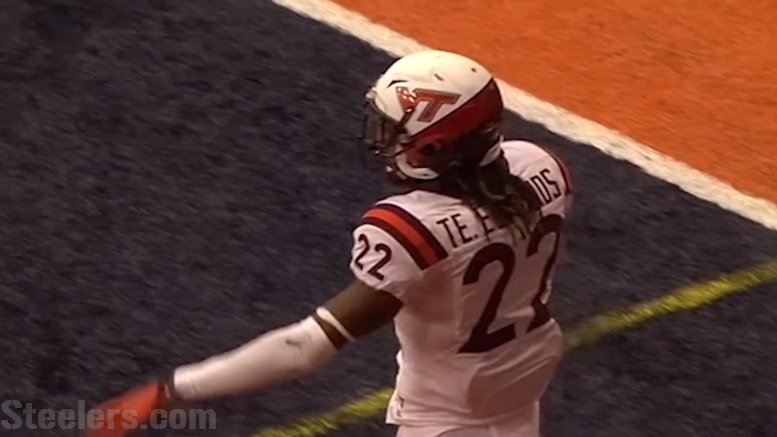 It’s only human nature at play when we get ahead of ourselves talking about what we expect is going to happen in the upcoming NFL season. Each new draft class brings up a world of possibilities, only a fraction of which ever actually come to fruition, and outside of assuming that a number of first-round players will find success, much of what comes after that is guesswork.

But hey, we’re still in the glow of the draft, so why not indulge? The rest of the NFL media certainly isn’t going to hold back. Not even NFL Network, or perhaps especially not them. They recently hosted a segment in which they talked about some of the (still theoretical) rookie-on-rookie matchups they are looking forward to seeing this season.

One such matchup they talked about was the Baltimore Ravens’ first-round tight end Hayden Hurst going up against the Pittsburgh Steelers’ own first-round draft pick, safety Terrell Edmunds. While there is a pretty reasonable chance that both of them see playing time early, it can’t be guaranteed.

And to project that they will take reps against one another is an even bigger leap of faith. Not to say that it’s outside of the realm of probability.

It does make sense. The Ravens are rebuilding their tight end room, having parted with a few veterans over the last few years and seemingly settling upon the reality that Maxx Williams is never going to be who they thought he might be, while Nick Boyle is who they thought he was.

Hurst is an athletic tight end who is primarily a target in the passing game, though he has the potential to round into a blocker. If he is going to be used early on, however, it would be in the capacity in which he is comfortable, which is as a receiver.

Which means Edmunds would be going up against him in coverage. Which could be what he would be asked to do early on for the Steelers, lining up against tight ends in coverage. Though he keeps being painted as an in-the-box safety, he certainly has the athleticism to run with today’s receiving tight ends.

Daniel Jeremiah was the one introducing the matchup. The former NFL scout said he believed Hurst was the top tight end in the class, and he was indeed the first taken off the board. He said that Edmunds is best near the line of scrimmage, calling him an enforcer who is “going to deliver some big hits”.

Hurst has an easier path to significant playing time during his rookie season than does Edmunds. The Steelers bring back Sean Davis at safety and signed Morgan Burnett in free agency. Both of these starters tend to match up against tight ends in coverage, so we definitely can’t take it as a given that Edmunds would draw that assignment even if he is on the field as a third safety.