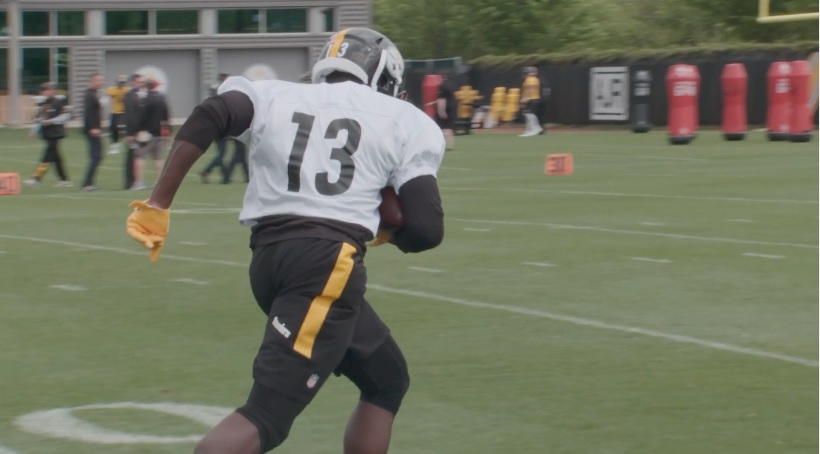 It is only the first three days of their NFL careers. But so far, so good for the Pittsburgh Steelers rookies, according to new offensive coordinator Randy Fichtner. That was his overall assessment of the four offensive players the team drafted in an interview with Steelers.com’s Missi Matthews posted earlier Tuesday morning.

“Bright-eyed, intelligent,” Fichtner said of the class. “There were some things we threw at them that they adjusted pretty well to. Knock on wood, they protected the ball well. A lot of those guys, the skill players, including the quarterback, are going to touch the ball a lot. And ball security is a big in everything we do.”

Rudolph reportedly had a couple issues with the center/quarterback exchange, though that’s predictable and all part of the growing pains of a new system and a new level of football. But all things considered, it sounds like it was a good start for him and James Washington.

“There’s a time that it takes to get indoctrinated to everybody. Everybody’s learning curve is a little bit different. We’re throwing a lot at them right now. It’s a nice challenge for them. It’s challenging but it’s also for us to see what they can handle early. We’ll throw a lot at them, we’ll regurgitate it to them again. And it’ll actually come together.”

If you read all the interviews Ron Lippock did with players who participated in camp, virtually all of them raved about Rudolph, Washington, or both. And there were plenty of reps to soak up. In Rudolph’s case, he was only one of two quarterbacks in rookie minicamp.

Frankly, this past weekend is going to be the most reps and individual attention from Fichtner he’s going to get for a long time. Ben Roethlisberger will get his work when he practices and there’s Landry Jones and Josh Dobbs, who will cut away at Rudolph’s practice time. If the rookie becomes the #3 quarterback for the regular season, there are essentially zero practice reps to give to him; the entire focus is on the #1 and the #2, guys who need to be Sunday ready.

For now, it sounds like Rudolph, Washington, and the rest of the rookie class took a positive first step. That’s all you can ask for.