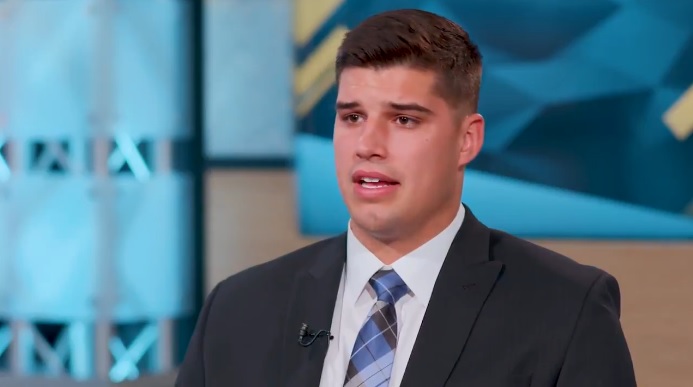 Oklahoma State quarterback Mason Rudolph knew there was a pretty reasonable chance that the team that ended up drafting him would be the Pittsburgh Steelers—even if he figured it might be in the first round rather than the third. Perhaps learning that they had a first-round grade on him anyway has eased some the disappointment of getting drafted later than he hoped.

But he’s certainly relieved by now that their interest was genuine, because he wasn’t quite sure at the time. He wondered if it might be a diversionary tactic. He told Missi Matthews during an interview for the team’s website about that and many other things.

“A lot of times that could be a smokescreen. People could just be there to check it out. You don’t know why. You don’t know how much they’re really evaluating you”, Rudolph said about his cautious approach during the pre-draft process. And probably while he was sitting at home during the second round, too.

“But I felt like I’ve always had a good connection with Mr. Colbert, and obviously I got to meet Coach Tomlin at my Pro Day, so it was a good chance to meet everybody. I always had in the back of my mind that maybe they could be looking at somebody this year”.

And of course they were looking at somebody, specifically: him. The Steelers didn’t appear to show much interest in any other quarterback, though they did attend Lamar Jackson’s Pro Day. But it’s pretty clear that their focus was on him when it came to the position.

He said prior to the draft that he was going to host a draft party and that it would start on day one because that is when he felt like he was going to go. Five quarterbacks did, but he wasn’t one of them. The wait was frustrating, but it was worth the wait when he did finally get selected.

“In the moment there’s barely any disappointment because you’re so thrilled, but to be coming to such an unbelievable organization, it was euphoric. It was awesome. It was an unbelievable moment with my parents, my family”.

He told reporters immediately after he was drafted that he was just looking forward to getting to work and getting the playbook in his hands. He’s done that now, and hasn’t been disappointed in the first days of his new professional career.

“Seeing the facility, talking to the coaches and getting my feet wet, it’s been awesome”, Rudolph said heading into the Steelers’ rookie minicamp this weekend, which will be his first work on the field as a professional athlete. I can virtually guarantee we’ll be seeing quite a lot of Rudolph this year, in training camp and in the preseason, as he looks to climb up to the backup quarterback position behind Ben Roethlisberger.