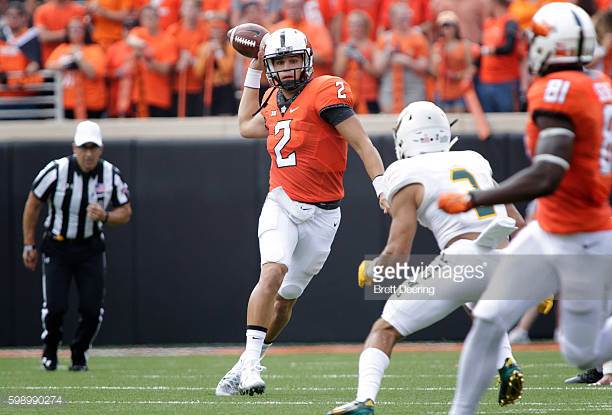 Much of the conversation surrounding the Pittsburgh Steelers’ selection of Mason Rudolph has to do with pretty much everything but Rudolph. So let’s put the focus on him for a moment. Pro Football Focus tweeted out this graphic of Rudolph under pressure his senior season and the numbers look good for him. Across the board, he ranked as one of the top QBs in the league.

A look at how Mason Rudolph performed under pressure in 2017. pic.twitter.com/Pt9CqhbgFv

It wasn’t all because of a spread offense too, if that is even a valid counter argument. After drafting him, Randy Fichtner said he played in a more traditional offense than other schools in the Big 12.

“They’re more of a dropback type team. If you look at Mason Rudolph and some of the things he did there,” he said in reference to Oklahoma State’s offense when discussing James Washington, a round before they took Rudolph. “They’re pretty much a throw-it-up type of team…they’re a pretty much a down the field, throw it around [team].”

Ficthner briefly talked more about the offense he played in after the card for Rudolph was turned in.

Pre-draft, Rudolph has known for his numbers and deep ball. But often, the biggest defining success of a quarterback is how they handle pressure. The ability to process and identify the blitz and adjust accordingly. Despite being a marginal athlete who may have trouble extending the play, Fichtner admitted as much, the fact he was able to look so good when under siege is a promising sign for NFL success. Of course, that isn’t a guarantee.

Handling the rush and getting the ball out quick was one of Landry Jones’ biggest issues his first two training camps. His game only got better when that aspect of his game improved, when that internal clock sped up like it needed to, and made him into a viable #2. Rudolph’s ceiling is much higher and ideally, he’ll become a starter years down the road.