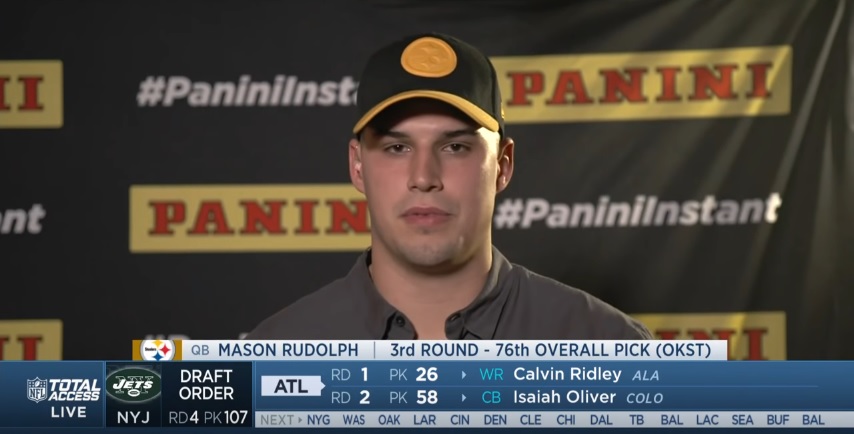 I’ve shared my thoughts on the future of the Pittsburgh Steelers’ depth chart since Mason Rudolph became the team’s third round draft pick. So if you’ve seen my mini-rants in a tweet or two, I apologize for being redundant. But if you haven’t, let me start off by making my point clear.

Rudolph should be the teams’ #2 quarterback in 2018. Which means, Landry Jones is expendable.

Now, I’m not guaranteeing it. All four quarterbacks are coming to camp, Rudolph hasn’t even put on his shoulder pads yet, and an injury could make all of this back-and-forth moot.

The reasons are simple. Pittsburgh is high on Rudolph. And even if we don’t take Kevin Colbert’s praise of him literally, where he said he valued him as much as any of the other top quarterbacks, all first rounders, we know they believe he’s capable of him being the heir to Ben Roethlisberger. Doesn’t matter if you or I agree with that notion, doesn’t matter if you wanted Rudolph here in the first place; and believe me, I was leading the no-Rudolph camp. I have the T-Shirts to prove it.

He’s here now and that’s all that matters. If he truly is expected to be Roethlisberger’s replacement, or at least given that opportunity, that path begins now. If Pittsburgh thinks he’s that good, he should be capable of becoming the Steelers’ backup quarterback, just in the way all the other QBs of this class Colbert compared him to will be – either the starter or immediate backup.

Landry Jones brings value as a backup. A veteran, experience off the bench, a man who has probably had the same beard and even-keeled personality since the day he was born. But rookies aren’t coddled the way they were when Roethlisberger broke into the league more than a decade ago. They have shown they can make an impact right away, have success their rookie year. Rudolph being unable to win the job over Jones, a serviceable but average backup quarterback, totally runs counter to Colbert’s apparent view of how good he can be.

For Rudolph’s development, being the #3 is going to hurt him. After the preseason ends, the #3 gets essentially zero reps in practice. They go to the starter, of course, and the backup. There’s no practice time for the third stringer to get his work in. Josh Dobbs talked about how difficult that was and what Mike Tomlin told him before Week One.

Rudolph would be in an identical situation. And what if Roethlisberger, though I don’t expect it, decides to retire after 2018? Now you’re future-franchise has effectively redshirted the season. Taking mental reps, sure, learning the playbook, duh, but nothing replaces practice and game reps. So he’d be further behind than what he could’ve been.

If the argument is: Jones is more experienced, knows the system better, so he should be the guy, then Rudolph – by that logic – could never jump him. Jones will always have the upper hand in that area, unless Rudolph has mastered time travel as well as he has QB.

Eventually, that argument loses its clout, unless you plan on Rudolph to just never, ever play.

The Steelers are either moving on from Jones this year or next. 2018 is the last year of his contract and I’d be shocked if he returned; the writing is on the wall. There’s the franchise and the future-franchise. Jones doesn’t fit in. So either Rudolph is the #2 this year or next and if it’s the latter, that’s also as a year without regular season practice reps or game action. All I’m suggesting is to do it now and begin the process of finding out what they have in the guy. If you’re against the idea, all you’re saying is that it should happen a year later. We’re not as far apart as you might think.

Of course, the Steelers want to win a Super Bowl this year. I’ve said this is their last best chance to do it. But that doesn’t mean Jones has to be the backup. that Rudolph can’t be the better player. If he can’t play at Jones’ level or is incapable of learning the system over these next few months, how can Pittsburgh view him as the franchise?

For Rudolph, the time is now. After a rough first two seasons, Jones has grown into a capable backup. But they’re the types of players who are one draft pick away from being replaced. Rudolph should replace Jones and one day, hopefully Roethlisberger, too.