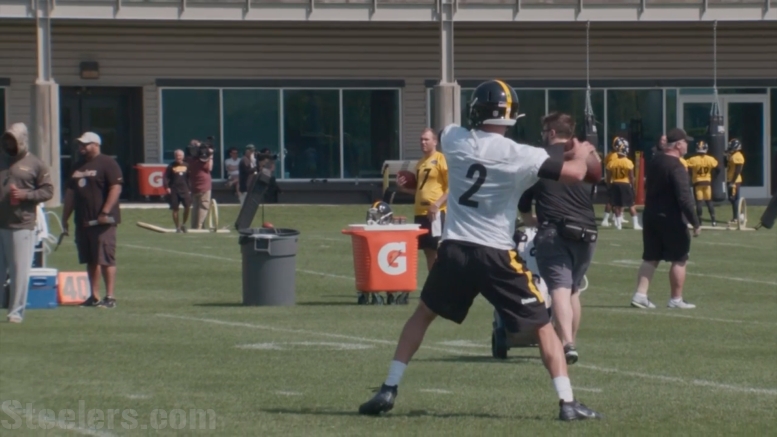 The reality is still setting in for Mason Rudolph and James Washington, the Oklahoma State quarterback-wide receiver duo that the Pittsburgh Steelers reunited with two of their three selections on the second day of the 2018 NFL Draft.

After spending their four-year college careers together, they will get to spend likely at least another four years as teammates, only this time in Pittsburgh. Rudolph, the quarterback, might take a while to get onto the field, but Washington is expected to have an impact as a rookie.

The Steelers have been cautious to make too much of the pairing, even while the media—including myself—has talked it up some. General Manager Kevin Colbert made it clear after the draft that both selections were made in isolation of one another, and one didn’t influence the other.

He even hastened to add that they might not even spend a whole lot of time working together at the NFL level. If Washington is going to be an important contributor this rookie year, there’s a good chance he will see more reps with Ben Roethlisberger than with any of the other three quarterbacks currently on the roster.

But as Alex Kozora noted yesterday, they got the opportunity to hook up during rookie minicamp on the field, and they will naturally have a strong relationship off of it. Neither of them could help themselves from gloating about how great the other was during this past weekend’s practices. Each of them spoke to the team’s website in video interviews that quite frankly I can’t find at the moment to link to through the new layout.

“He’s a passionate guy”, Washington said of his college quarterback, for example, and that is certainly a quality that Rudolph has routinely put on display so far. “Once he builds a bond with people, he’s like ‘hey man, what can I do for you?’. He’s just really genuine. What you see is what you get”.

I talked just yesterday about the fact that the rookie quarterback already seems to be able to deftly handle the media, not just in terms of avoiding saying the wrong things, or knowing the right things to say, but also in being natural and personable.

As for the quarterback, he’s not taking lightly the fact that he has been given the opportunity to take his first steps in the NFL with the best connection that he has ever had in football, having built a relationship that extends as much off the playing field as on it.

“It’s crazy to believe because it’s just never really happened”, he said of such a duo coming into the same team together. Not that it’s never happened, but it is pretty uncommon. “For me and him to already have that chemistry and to just bring it here to Pittsburgh, whatever we do, we’re going to do it to the best of our abilities”.

Could we one day be witnessing those two hooking up for touchdowns in a Super Bowl, a few years from now? That is the highest of hopes, of course, but there is a lot of work to be put in on the field and in the classroom before we get to that point.