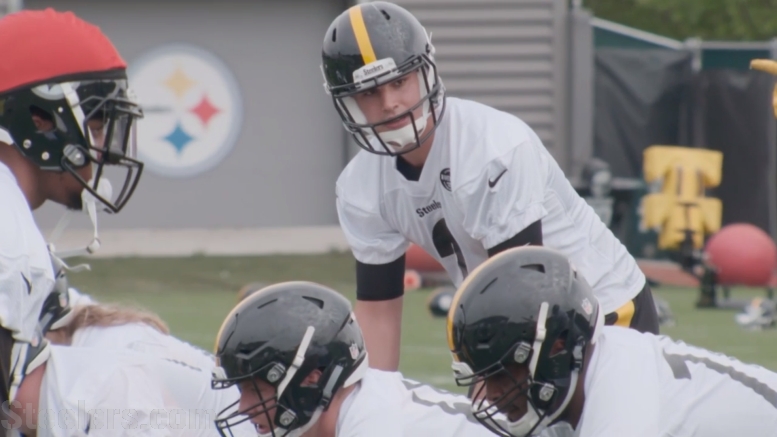 One of the biggest criticisms of college quarterbacks coming into the NFL once the proliferation of the spread offense began changing the game at that level was that they would have trouble adjusting to taking snaps under center, since they spent so much time playing out of the shotgun.

This is not an argument that holds anywhere near the water that it once did because a lot of NFL quarterback now spend the majority of their time out from under center as well, and the truth is that the Pittsburgh Steelers operate out of the shotgun as much as anybody, something like in the ballpark of two-thirds of their snaps, if memory serves.

Still, it never hurts to put the work in to improve a week point in your game, and that is something that Steelers rookie Mason Rudolph has been doing this offseason as he adjusts to spending more time under center than he did while playing for Oklahoma State over the course of the past four seasons.

The third-round draft pick answered questions from the media early on during rookie minicamp, on Friday last week. One of the first questions that he had to address was about how he was adjusting to playing under center.

“I’m doing pretty well”, he offered, pointing out that it’s something that he has been working on for some time already. “I’ve had a little bit of a crash course these past couple of months. The Senior Bowl, the Combine, and then I’d been working on it leading up to my Pro Day. Whenever I throw, whenever I get some guys together, it’s always been under center”.

You may recall some reports from the first day of rookie minicamp that there were a couple of botched snaps, and he talked about that as well. “There were a couple of balls on the ground today, but that’s to be expected with a new quarterback-center exchange. We’ll work through that and we’ll get better”.

The bottom line is that it’s highly unlikely to be anything to be concerned about. One need only look at the frequency with which Ben Roethlisberger plays from under center, though that may be at least a bit of a Roethlisberger thing. When Landry Jones has been in, for example, he has been under center a bit more and used play action a bit more as well, but those are relatively small sample sizes.

Taking snaps from under center is just one of the many things that Rudolph has on his plate right now, of course, even if he knows that he is not about to be the team’s starter. He will have the time to develop, barring injury anyway, to work out all the kinks before he actually has to get out on the field.