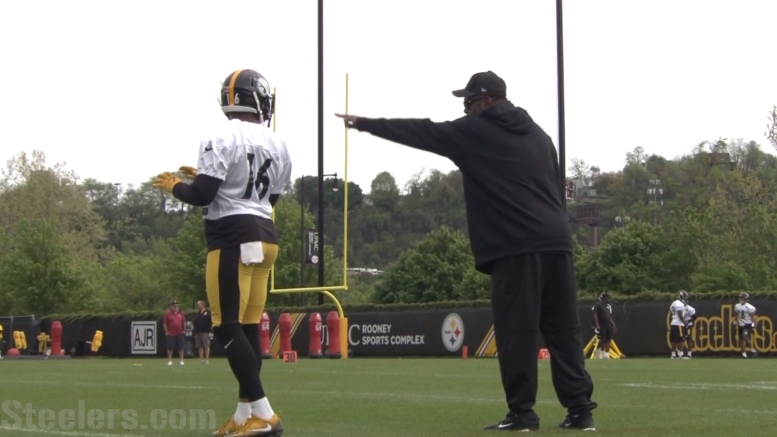 There isn’t a ton of information that you can learn from rookie minicamp in the grand scheme of things when it comes to what your team is going to look like come September. But it does at the very least create the opportunity to make first impressions, and we have already gotten to hear a couple of first-impression impacts for some of the Pittsburgh Steelers’ new coaches on-staff.

After Friday’s practice, first-round safety Terrell Edmunds talked about new defensive backs coach Tom Bradley and said that he liked the veteran coach’s detail-oriented approach to the endeavor, saying that he likes to write a lot of things down to help drill in key points.

The new face on the offensive side of the staff is at the wide receivers coach position, with Darryl Drake having been brought in to take the place of Richard Mann, who retired this offseason after five years with the team. It’s something the Steelers knew they would have to prepare for.

But the Arizona Cardinals’ staff getting blown up following the retirement of Head Coach Bruce Arians gifted them the opportunity to land a quality coach at the position in Drake, who has worked with a number of top receivers in the past, and he, too, left a good first impression, according to Marcus Tucker.

Tucker, originally a tryout player in 2016, is working in his third rookie minicamp this weekend after spending the entirety of the 2017 season on the practice squad and is hoping to make the 53-man roster for the first time this fall. As the most veteran wide receiver in the camp, he was asked for his thoughts on the new coach.

“I love coach Drake”, he told reporters, according to a video shared via the team’s website. “The dude, he’s a veteran. 20 years in the game, has coached some legends, been a part of some legendary staffs and great programs. I’m so excited. He brings such a new feel to the game. New drills, just all types of different things that we can work on. I’m just excited”.

Another reporter followed up by noting that Drake was pretty vocal out on the field and spitting out one-liner aphorisms in the form of coaching lessons. “It’s a lot of Drakeisms that we’re picking up on”, Tucker shared with a laugh.

But he couldn’t share some of his favorites, he said, relaying that they could get explicit. “Catch with your eyes” was one, and “keep your eyes on the defender” another. I’m sure we’ll hear even more once we get to training camp.

It will be interesting to get the reaction of some of the veteran wide receivers on the team about Drake, though I guess at this point I’m really just talking about Antonio Brown and Darrius Heyward-Bey, as nobody else on the roster has been here very long.