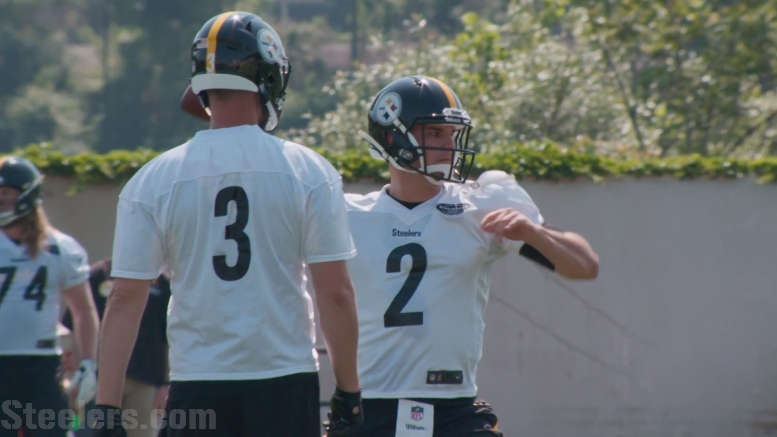 Ben Roethlisberger’s post-draft comments might have given the impression that the rapport within the quarterback room might get a bit chilly this season—not to mention crowded—but the drama over that has since subsided now that everybody has gotten on the field and gotten a chance to work together.

For his part, Roethlisberger said that he felt some of what he said was taken out of context or outside of the joking spirit he intended. If anything, he likely was just trying to stick up for his veteran players. It’s not uncommon for him to make somewhat distant comments about rookies before he’s seen them on the field and worked with them.

But the quarterback has liked what he has seen in rookie Mason Rudolph so far. As has Landry Jones, who has been Roethlisberger’s primary backup for the majority of the past three seasons, and who is now in the early stages of a roster battle.

“For me it’s kind of like status quo”, Jones said of fighting for his job. He pointed out that they brought in Mike Vick in 2015, his third season, though they did that after Bruce Gradkowski was injured. Gradkowski would have been Roethlisberger’s backup.

Jones eventually surpassed Vick and took over the backup role, so when Gradkowski was injured again the following year, and they brought in Zach Mettenberger, there wasn’t really much of a competition for who would be the backup.

This year should be different with Rudolph, a third-round draft pick, in camp, who, according to Jones, has “done a good job. He’s a big, strong athlete, throws the ball really well. I’m excited to kind of get to know the guy better and develop a relationship with him”.

As I’ve written about in the recent past, Rudolph is probably going to have a stronger and more direct relationship with Jones and Joshua Dobbs than he is going to have with Roethlisberger, at least initially, though that can change. Jones said that he and Dobbs “got close last year” as well. The latter was a fourth-round pick in 2017.

“It’s just the crappy part about this business”, the sixth-year veteran said of the annual trimming down of the roster. “You make relationships with people and they can only keep 53 of us. It’s kind of a revolving door and if you’re not playing well you’re not going to be here”.

Chance are either Jones or Dobbs will be looking for a new job come September, even if they might not have to wait long, as quarterbacks tend to get picked up swiftly provided that they have a clean history. Everybody in the room knows that.

Both of them have been mature about it, though. They know what the business is like. They knew before they even entered the league they would have to compete for their spot. Rudolph might be given a redshirt year, but even he eventually will have to earn his place on the team every year like everybody else.