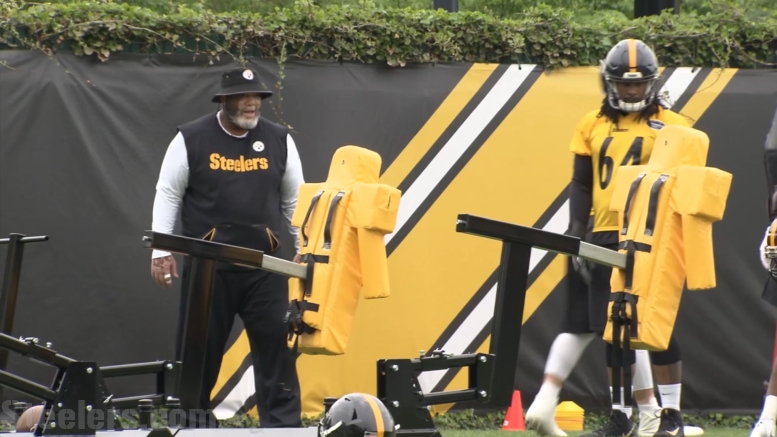 Rookie minicamp is the first taste of the NFL for most of its participants out on the practice field. While there are a good number of first-year players that have been there before, the majority of the roster is made up of rookie draft picks, signed undrafted free agents, and college free agents who have been invited on a tryout basis.

Even many of the first-year players, though, would be getting their first taste with a new team, as is the case with some on the Pittsburgh Steelers. The four offensive linemen signed prior to the draft would be a perfect example.

It’s a whole new world of opportunity for every player out there on the field. But it’s also another opportunity for the coaching staff to self-evaluate, which is something that defensive coordinator Keith Butler talked about during a sit-down interview with Missi Matthews for the team’s website during this past weekend’s rookie minicamp.

“We’re throwing a lot at them, and what we’re trying to see is a couple of things”, Butler said about the strategy for the weekend. “One [is] how much they can take and how much they can digest mentally and produce it on the field, as well as trying to see how good we are at teaching stuff. It’s kind of a two-pronged thing for us. We want to see how well they learn and how well we can teach it”.

And that is actually especially important for the Steelers this year because they are introducing three new coaches to the staff, and breaking another two of them into new roles. There have also been changes made at the assistant level.

Matthews asked Butler about if he felt it was going well so far for the team’s two new defensive coaches on the staff, those being defensive line coach Karl Dunbar and defensive backs coach Tom Bradley. “I think it is for both of them”, he said.

We’ve already gotten to hear from both Terrell Edmunds and Marcus Allen, the Steelers’ two rookie defensive backs taken in the 2018 NFL Draft, about Bradley, and both of them have been highly complimentary about their new coach.

We haven’t yet heard from any of the defensive linemen to talk about Dunbar, though the team’s one draft pick at the position, Joshua Frazier, is already very familiar with him. Dunbar coached Frazier while with Alabama for the past two seasons.