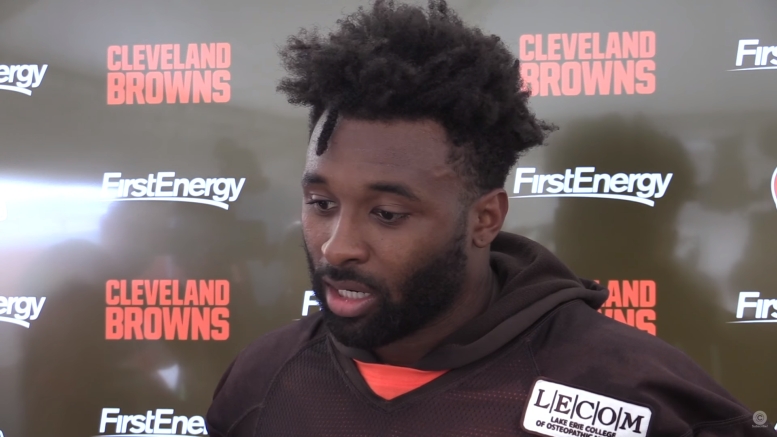 Pittsburgh Steelers fans are well aware that the best wide receiver in the league resides in the AFC North. They just didn’t realize that he is actually on the Cleveland Browns, and not the Steelers. Or so says Jarvis Landry, who has actually yet to play a single down for the team to which he was traded in March.

Landry, a second-round pick in the 2014 NFL Draft out of LSU, spent his first four seasons in the league with the Miami Dolphins, during which he caught 400 passes for 4038 yards and nine touchdowns. He has two 100-reception and two 1000-yard seasons under his belt.

He caught a career-high 112 passes last season with a career-best nine touchdowns, though for only 987 yards, averaging an oddly low 8.8 yards per reception. For perspective, that is only a tenth of a yard better than Jesse James has averaged over the past two seasons.

During the Brown’s OTAs, Landry’s first opportunity to get on the field with his new team, he told reporters, “I consider myself the best receiver in the NFL”. Now, I know Steelers fans—and fans of any team with good wide receivers—are going to jump on him, but I never take issue with a player believing strongly in himself, even to the point of denial.

The wide receiver was asked about his ranking in the NFL Network’s Top 100 Players list, in which he ranked as the 52nd-best player. “I consider myself the most complete receiver”, he said. “If you turn on the film, I do everything”, listing inside-outside versatility, blocking, and lining up in the backfield as among his credentials. “My value is that much more to the team and to the offense”.

The Dolphins weren’t thrilled about his value, however. While they placed the franchise tag on him at the start of the offseason, they used the non-exclusive tag with the intention of trading him, and they found a partner in the Browns, who gave up a 2018 fourth-round pick and a 2019 seventh-round pick for him. Not exactly a steep price for the best wide receiver in the NFL, who is just 25 years old.

About a month after trading for him, the Browns worked out a long-term extension with Landry, signing a five-year contract worth 75.5 million, nearly two thirds of which was guaranteed. By average annual salary, he at the time was made the seventh-highest-paid at the position.

The highest-paid of course is Antonio Brown on the Steelers, who may well also be in the discussion for the best wide receiver in the NFL. Despite the fact that he missed two and a half games, he recorded 101 receptions in 2017 for 1533 yards and nine touchdowns. He has put up 582 catches for 7848 yards and 52 touchdowns over the course of the past five seasons.