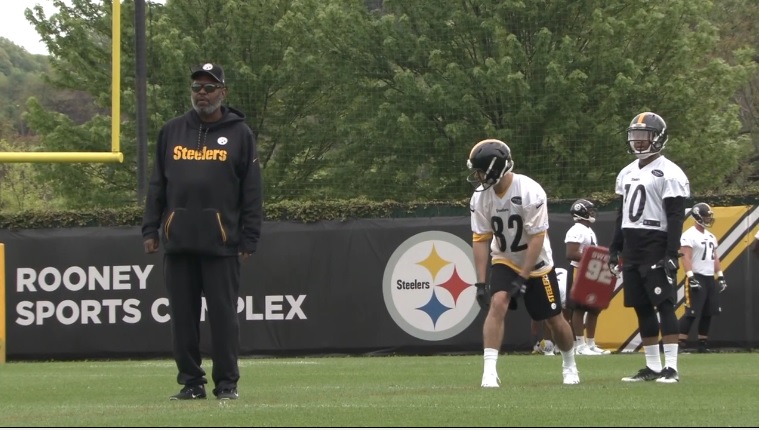 It went great. It was a great opportunity. I’m new to playing receiver still – I was a quarterback for my first three years in college. Just being here trying out in the NFL…in the past three days the skills I’ve learned as a receiver…I’ve grown exponentially. It’s been so beneficial. An awesome experience learning from so many experienced people here in Pittsburgh.

Who really helped you most – and how?

Coach Drake – he has tons of experience to offer. He helped me so much in learning when to look ball for the ball, looking at defenses and understanding pre-snap when to switch routes.  He also helped me a lot in improving the top of my routes. I would bounce off the wrong foot a lot and he worked with me on that – you can’t do that in the NFL.

I’m trying to get it all down – the fundamentals.

What’s next now that camp is over?

I have to wait to hear from Pittsburgh now on what they have to say. I’m here on a tryout – they told me I’m on the list. They’ll watch the film and get in contact with me if they need me. Whether it’s a stint in another city, Pittsburgh, or the CFL…I’m just waiting to hear feedback and excited to move forward.

You have things lined up elsewhere if you don’t hear from the Steelers?

I heard a lot from the CFL – there are two different teams that have have a lot of interest in me. In the draft, I heard from the Colts in the fifth round but they took too many guys and didn’t have room for me on the roster.

There are a few NFL teams that showed interest, The Bengals and a couple of other teams. Some scouts seemed to really like me. I had a solid offseason and if I don’t hear from NFL teams I know I’ll probably have two contract offers from CFL teams at least. It’s on God’s hands now. I’ll let the chips fall where they may.

How did camp go for you – what do you think went well?

Speaking for me, I was told going into it that as a rookie free agent I needed to do everything right. I caught everything – caught every punt and kickoff return from the jugs machine and I caught every pass thrown to me. I think I had sharp mechanics and gave it all of my effort. So I think I did really well and have a good feeling. I’m pretty positive regardless of what happens.

Who stood out to you in camp?

There are a lot of good players here. The speed is much greater here. They close faster on routes and the ball comes out faster. You have to get to the top of your routes faster.

It’s an NFL camp – so it is everything I expected it to be. If you don’t go at full speed 100% of the time you’ll get blown on by. I’m a division two guy – we’re all here for a reason though. I couldn’t focus on who here was taken when in the draft – I didn’t want to think about that. I just wanted to show everyone what I could do.

Anyone you get close to camp and bond with?

I roomed with Damoun Patterson who just signed with Pittsburgh. I’m really excited for him. We got to spend a lot of time together and got to know each other.

Vet-wise, Marcus Tucker brought everyone together. He was great with all of us and helped us every time we had a question. I’m a huge Tucker fan for good reason, He is a great guy. The vets don’t have to help but he spent a good amount of time with us.

And Tevin Griffey – he was great and helped me a lot as well.

What role do you think would best suit you as an NFL receiver?

I think I have big upside. The sky is the limit. I can be a bigger slot receiver and I have good speed. I’m here because of my speed. I can be plugged in in all areas. I’m comfortable in the slot.

As a division two guy I look a lot at a Adam Thielen and think I can be that kind of guy, His story is similar to mine. I try to emulate his work ethic and toughness.

Lastly, what should we know about you beyond the football field. Who you are and what you’re like as a person outside of football?

My football career has been a crazy journey. We all have a story. My story is that one would never expect me to be here, I was a decent college quarterback but I didn’t play quarterback well enough and transferred to receiver my senior year in college. I took the most of that opportunity. I do that in life and in football.

I plan to make the most of this opportunity – in Pittsburgh or elsewhere. I think I have an interesting background football-wise. In high school my team was ninth in the country, then I transferred my junior year.  The same in college when I transferred to Gannon. It wasn’t an ideal career. So to be able to get to this point – it’s about the people I was blessed to have around me. I was able to overcome adversity and it’s been an interesting path to have gotten this far.