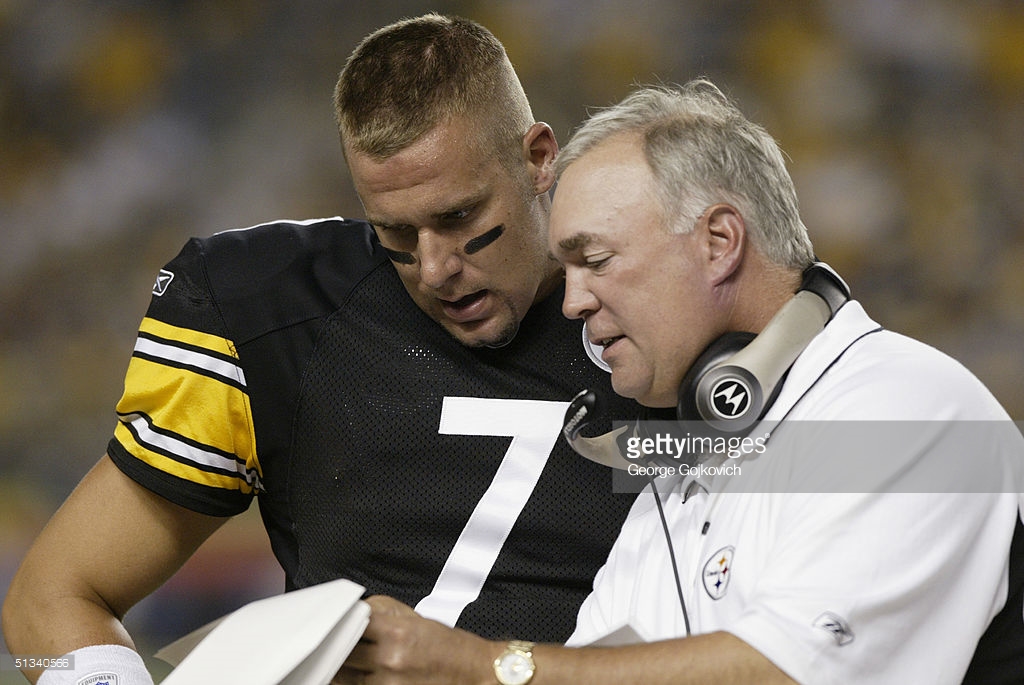 Bringing you another Pittsburgh Steelers’ interview courtesy of our good friend Ron Lippock of the Pittsburgh Sports Daily Bulletin. Today, Ron has a special interview with former Steelers QB coach Mark Whipple, who served with the team from 2004 to 2006 and was the first coach Ben Roethlisberger had. Currently, Whipple is the head coach at UMass.

I think it’s teaching – helping young people reach their goals and creating goals for them to reach. That’s always the most important part. I have lots to give young people with my years of experience. That’s why I went back to U Mass. I knew I could affect more people there.

Who helped shape your approach to coaching and how?

My high school and college coaches….Bill Cowher…Dick LeBeau who I think the world of. Andy Reid and George Allen…

That’s a lot of big names – how did they help you? I’ve spoken to guys like Aaron Smith who spoke about how Coach Mitchell changed his approach…

There are a lot of great stories about Coach Mitchell yeah. He was the first African American player in the SEC. He was a great person.

My time in the NFL helped me. I was a head coach for what, sixteen years or so. But when I came back to the NFL I learned how to be an assistant and look at the whole picture. That made me a much better football coach, knowing the trials and tribulations of assistant coaches. You never stop learning. I’ve learned a lot of the schematic things over my time in the NFL, but learning just how to be a coach was more important.

I talked with Jerome Bettis then about why he went to Notre Dame…Hines on why he went to Georgia. Why Ben went to Miami of Ohio. That’s helped me now. It’s all a learning lesson and now I can impact young people and give them a better chance to succeed. That knowledge creates confidence.

So, tell me a bit about coming to Pittsburgh as their Quarterbacks Coach. Why did Bill choose you and why did you interview for the job?

I was fortunate. Chris Berman was a good friend of mine and he pushed me to go to the NFL.  I interviewed with San Diego and San Francisco as well. The time was right. U Mass was deciding whether it wanted to be a Division 1A team or not. We were 1AA and just won a national championship but they didn’t know what they wanted to do so I thought the time was right to make a move. I got lucky – I guess Bill liked me. Then they drafted Ben. LeBeau and other guys came in…it was a great staff. A nice mix of people.

I wouldn’t say it’s because I had more knowledge at the pro level. I coached one year in the USFL though. It’s just the way he wanted to put together his staff. Whiz was the offensive coordinator…It was just a good fit. I didn’t just come in with college ideas. That’s not what he wanted.

Then they draft Ben. How did you help Ben to be as effective as he was that rookie season?

I really just did my job in getting him ready. I think I gave him the confidence he needed. He knew I was behind him. And Tommy Maddox was a great asset for myself. He knew the offense better than I did and helped me in a lot of ways. I was able to be an earpiece for Ben.

Ben was a young guy out of Miami, Ohio. He needed someone to believe in him. At the time Tommy was the starter and, well…I’m not sure how Tommy felt at the time about Ben being there. But I will say Tommy told me something that still sticks with me. He told me he hadn’t see anyone as talented as this guy since John Elway.

What made Ben so great then?

He was big, he could run and he was a tremendous competitor. He was just tremendously talented. He won everywhere he went. It’s funny that so many people say he won with a loaded team his rookie season. That was a 6-10 team the year before. It just wasn’t the case. They won in great part because of him.

How was Bill Cowher with you and the rest of the staff?

He was hands off when he talked to us but he was vocal in all of the meetings. He knew what was happening in all of the game plans. I was kind of the go-between for Ben and Bruce Arians. I’d help talk to Whiz if Ben liked or didn’t like a play.

I didn’t have much to say about the playbook then. I really talked more to Arians about what Ben felt comfortable with and relayed that to Bruce – before the games and at halftime. We’d talk about what schemes Ben felt good in and what schemes were working for him.

Tell me a bit about your involvement in the draft and your thoughts on Ben versus Rivers at the time?

At the time I went to see Rivers. We thought Eli would go first. Phil Kreidler and I watched Ben at his Pro Day. It wasn’t a great day and Cowher and the rest of the guys didn’t go. It was held outside and it was cold and windy. But Ben threw the ball with no problems.

I still think if he stayed another year he would have been the first pick in the draft.

Where did you have him compared to Rivers in your scouting reports?

My report had him over Rivers. I was the coach at U Mass when we played Rivers. He was  a tremendously talented guy. In fact, two of those three quarterbacks taken first in the draft that year should be first ballot Hall of Famers. Rivers just didn’t have the team around him the other guys did.

I was really impressed with Phil but Ben was a year younger which we valued, and he was a lot more athletic. I didn’t meet Phil’s parents but Ben’s were great people. And playing well in the cold weather was a huge thing. His senior year he played Bowling Green in a snow storm and threw for over 430 yards. That’s huge for a player playing in Pittsburgh. We’re not playing in a dome.

He didn’t even play quarterback until his junior year in high school. He was a wide receiver before then because they were starting someone else there instead.

You mentioned before that Ben never gets the credit he deserves. Talk more about that?

Well, he was a natural and a good leader. He never got enough credit, but I think when he leaves he’ll get more. We weren’t a great team when he got there and Bill wasn’t sure if he was going to get a new contract. I thought about it a lot when I was in Cleveland – what if we had drafted Ben instead of Pittsburgh?

OK – enough about Ben. What’s next for you?

Well, I’m at a great place for me and my family. I get to take young people and help them. This was never a financial decision to come back to U Mass. That’s not why I got into this business. I’m here to help people. It’s a huge challenge here but we’re seeing signs as we play as a Division 1AA team now. We have a tougher lineup and play Georgia next year, so we’ll see where we stand. We have a lot of good young guys. It’s a great school – it’s easy to recruit kids to come here.

Lastly, what do you say to those young kids who have a chance to make it in the NFL?

Don’t lose your respect for the people and the game. Enjoy every moment because it happens fast and it goes in a hurry. Even for the star players. Many don’t understand that. Respect every minute you have.