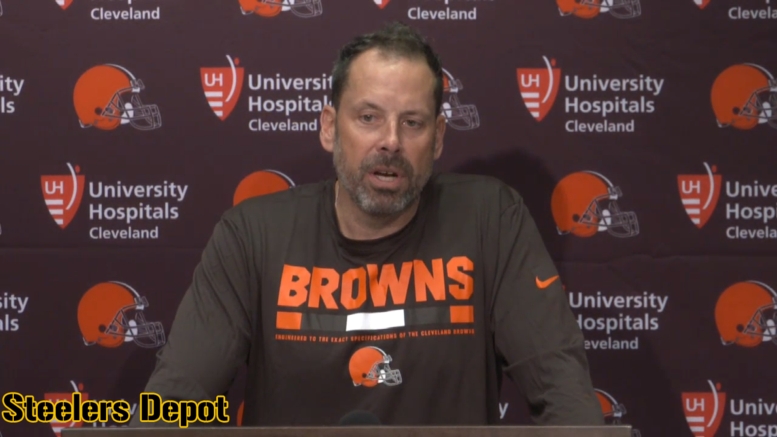 The Cleveland Browns don’t often have a lot of things in common with the Pittsburgh Steelers other than opponents. They do share a former owner in Jimmy Haslam though. And now they share a former offensive coordinator in Todd Haley, who is going to put his stamp on the Browns’ offense after spending the past six seasons in Pittsburgh.

The Steelers decided not to renew Haley’s contract for 2018 and beyond, choosing instead to promote from within, with quarterbacks coach Randy Fichtner in line to hold dual positions this year, and possibly beyond. But the former Steelers offensive coordinator quickly landed back on his feet in the AFC North.

The Browns recently got their rookie minicamp underway, giving the media another opportunity to speak with Head Coach Hue Jackson, entering his third season in that role. He held the play-calling duties for himself as offensive coordinator the first two seasons, but decided to bring in Haley this year.

“It’s not my playbook. I’ve given him total autonomy of the offense”, he said of Haley. “He’s been very respectful. Anything that I wanted to see or do, he’s always asked. We’ve always communicated that way”.

About handing Haley the keys, Jackson said, “I think you have to do it like that. He can’t go calling my offense any more than I could go calling his offense. There’s a respect level there. He’s one of the best in the business. He’s done a great job”.

But naturally as a head coach he still has to be kept in the loop, as they are a part of every aspect of came preparation. “I need to make sure I know how to call some of these things and how he goes about it”, he said about Haley’s offense. “It’s a good system. I think if you guys know football it’s kind of all the same. Some things terminology-wise are just different. A lot of concepts are alike. But again for our players, this is different terminology, and I think they’ve done a great just not just these guys here, but of our veteran guys picking it up”.

There were many reports this offseason about the Browns wanting to hire an offensive coordinator and Jackson being reluctant to bring one in. But “at some point in time you’ve got to keep transitioning”, he said. And “moreso than that, I would do anything in my power to help this organization win. And when I sat down and thought about it, I go, ‘what is going to put the Cleveland Browns in the best position to win games and be successful?’”.

His answer to that question: Todd Haley.