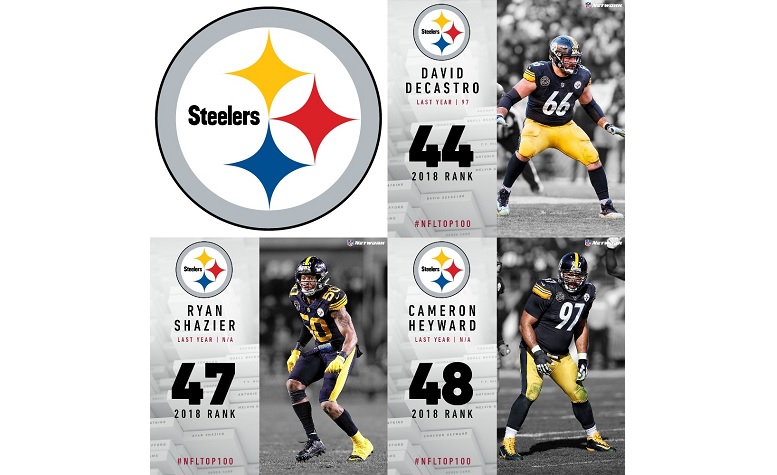 The NFL Network revealed players ranked 50-41 Monday night as part their annual Top 100 rankings and three members of the Pittsburgh Steelers were included in the 10.

Steelers defensive end Cameron Heyward is ranked 48th overall in the Top 100 this year after registering a team-high 12 sacks during the 2017 regular season. Heyward, who was also voted a first-team All-Pro for the first time during his career back in January, registered 45 total tackles in 2017. Two years ago, Heyward was ranked No. 88 overall in the top 100.

Steelers linebacker Ryan Shazier is ranked one spot ahead of Heyward this year in the top 100 at No. 47 overall. Shazier, who suffered a serious spinal injury last season, registered 89 total tackles, 3 interceptions and 2 forced fumbles in the 12 regular season games that he played in 2017.

Steelers guard David DeCastro, who like Heyward was voted a first-team All-Pro for his play during the 2017 season, is ranked No. 44 overall on this year’s Top 100 list.

DeCastro, a three-time Pro Bowl selection, is currently considered one of the best right guards in the league. Last year he was ranked No. 97 in the Top 100.

The Steelers will likely have at least three more players in this year’s top 100 as quarterback Ben Roethlisberger, wide receiver Antonio Brown and running back Le’Veon Bell are all expected to be announced in the coming weeks.