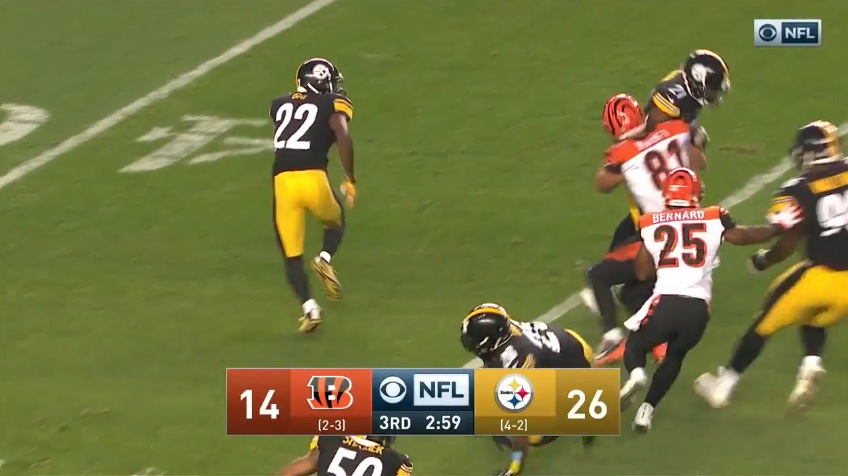 When Terrell Edmunds was drafted, we wrote a film room article on how he can be an upgrade in the Pittsburgh Steelers’ dime defense. Now that we know he got at least a couple reps at linebacker, albeit in rookie minicamp, it’s a good time to take a step back and give a broader look at what that position actually is. Because I think there’s been a little bit of confusion about what that role actually encompasses or that it’s something brand new to the defense.

1. The dime defense doesn’t remove both linebackers on the field. It removes one, Buck linebacker Vince Williams along with NT Javon Hargrave, who is already off the field when the Steelers go into nickel. Jon Bostic, unless Keith Butler does something crazy and relatively unseen, will remain on the field. That’s one reason why he was brought in and why Kevin Colbert talked about the specialization of the ILB position; you need one linebacker who is never removed from the field. Bostic has experience as an every-down player.

2. The dime defense isn’t new. Pittsburgh has been doing it extensively for the last three years. In 2015 and 2016, it was Robert Golden’s job. Last year, it went to William Gay.

Pictures always help so let’s look at two examples of the Steelers’ dime defense. Here’s the first time they used it and the final time, both games against Cleveland. It’s a 2-3-6 grouping with two DL, 3 LBs (2 outside, 1 inside), and six defensive backs. 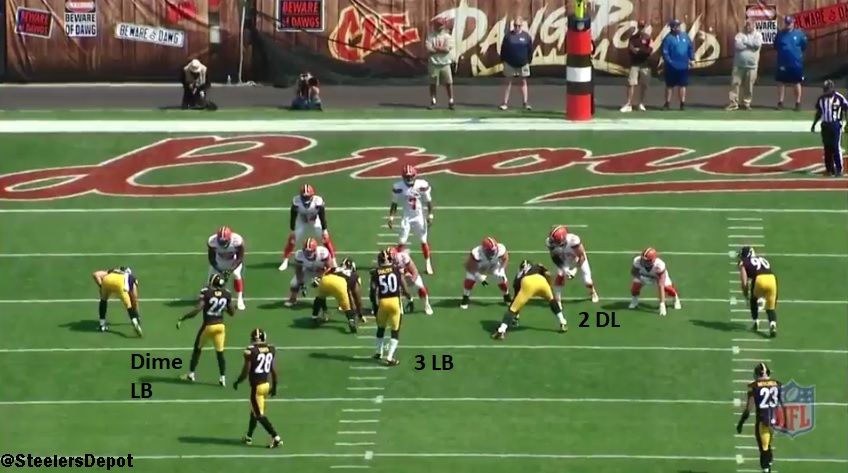 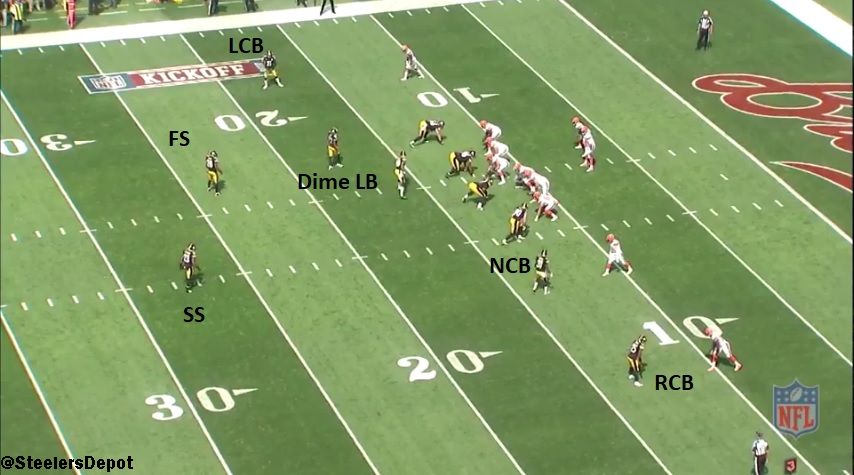 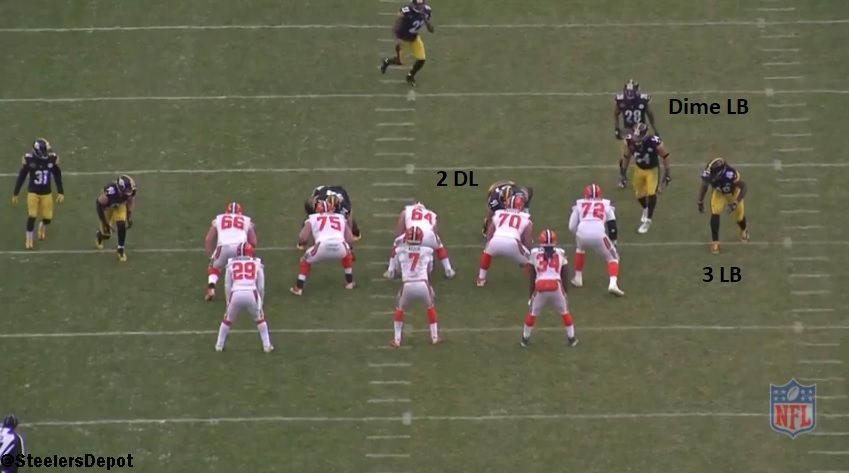 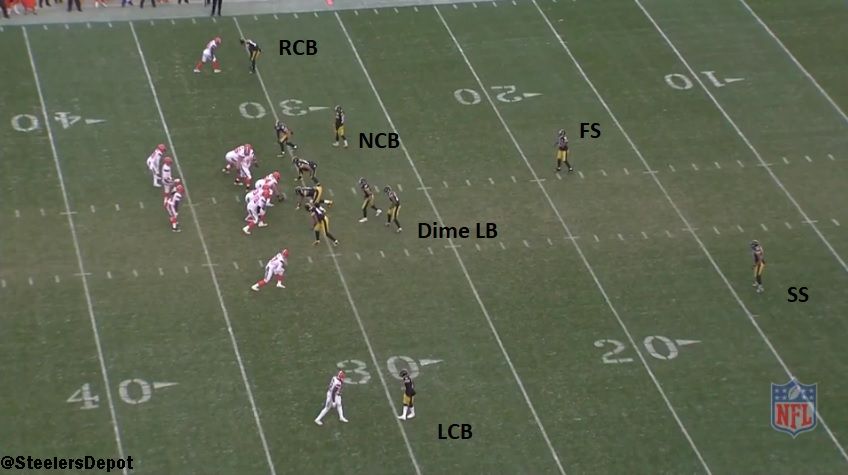 When I talk about the “dime linebacker,” that’s the position held in those pictures by Gay. The man who replaces Williams at ILB. They have to wear a lot of hats, though it’s primarily a coverage role because dime has only been used in passing situations.

Two looks of the passing game. Straight man coverage here against the Y tight end. Run with the crosser, close on the ball, play physical at the catch point and force the incompletion. Solid rep.

Here’s a zone drop with Gay reading the route combination. 3rd and 4. Gay opens his hips as the tight end stems vertically off the line, eyes reading 2 to 1. As Tyler Eifert doesn’t go vertical and sits down, Gay peels off him, flips his hips to the quarterback, and gets depth. 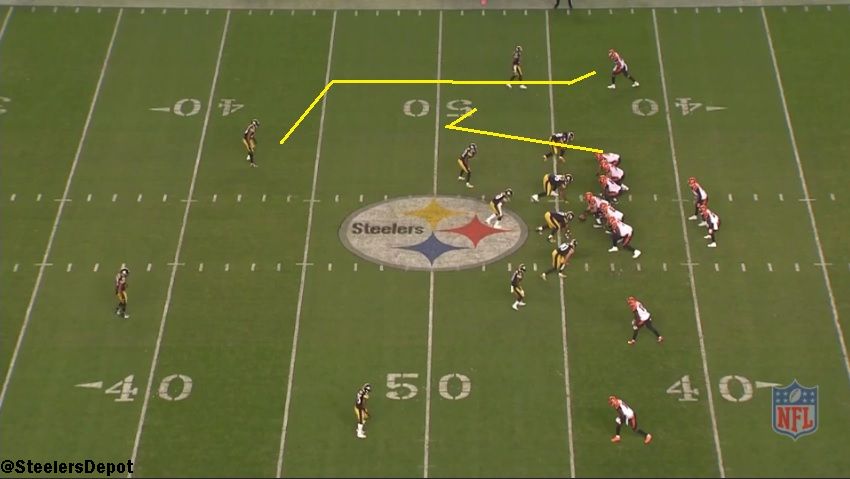 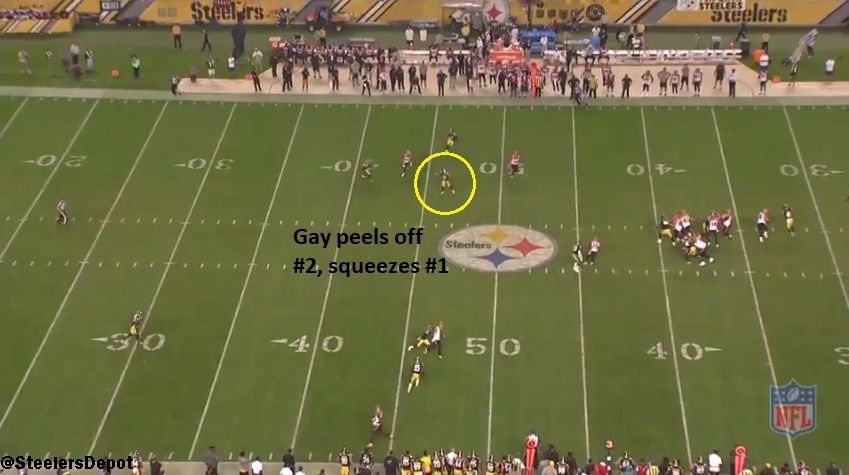 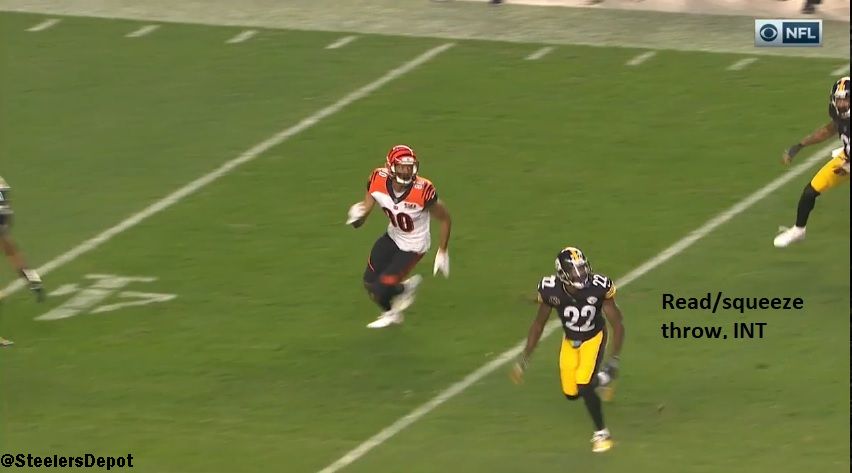 He squeezes Andy Dalton’s throw – Sean Davis does well to drive and make a break on the ball – and Gay picks it off on the bounce.

But they will have to occasionally play the run, too. From that first screencap in Week One, on 3rd and long and the Browns running a draw, Gay has to work around the guard and undercut the back for a short gain. Defense gets off the field and the Steelers block the punt for their first points of the season.

The dime backer has only occasionally blitzed but with a better blitzer – like Edmunds or Morgan Burnett – maybe we’ll see more of that in 2018.

This is a simple overview so if you’ve followed the Steelers really close, none of this is going to be new to you. But I wanted to define the role because it’s one I’m betting you will hear a lot about once the season starts. And I’ll reiterate what I wrote before. While the team may not play A LOT more dime, they’ll play it much more effectively.