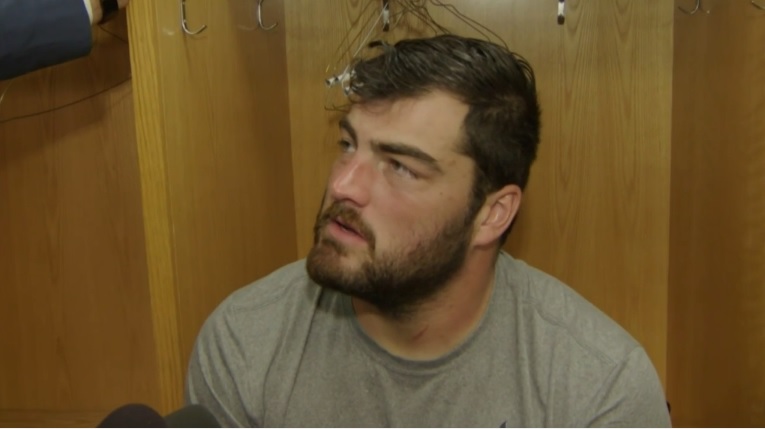 It seemingly really takes a lot to upset Pittsburgh Steelers guard David DeCastro and he made it quite clear on Thursday that other veteran players such quarterback Ben Roethlisberger, wide receiver Antonio Brown and running back Le’Veon Bell all missing OTA practices doesn’t bother him one bit.

“Even if they were here, even without pads, it’s not much,” DeCastro said at the conclusion of Thursday’s OTA practice, the team’s sixth one of 2018, according to 93.7 The Fan. “I mean, you’re just using this to really get in shape and obviously some young guys are learning the offense and learning the little techniques here and there. But the older guys, guys like us and the guys up front, are just getting in shape, the individual time with Munch [Mike Munchak] just getting through the technique is great and just getting in shape is great.”

DeCastro went on to reiterate that it’s much better for the younger players to get meaningful reps during OTAs instead the older and more experienced players who have been with the team a while.

“Yeah, it’s good for the young guys that need it,” DeCastro said. “I’m not too worried about reps in no pads, I never have been. So, it’s like I said, just getting into shape and letting the young guys that need them because they’re a lot faster reps for those young guys. They need to get that technique down and the kind of game-like speed. Whereas us older guys, we’ve kind of seen it all at this point.”

One of the younger players that seemed to be taking advantage of OTAs up until Wednesday was third-year tackle Jerald Hawkins. However, Hawkins will likely now miss the entire 2018 season after reportedly suffering a torn quad during the team’s Wednesday OTA practice.

“It sucks, man,” DeCastro said of Hawkins getting injured on Wednesay. “That hurts. We were just talking about how well ‘Hawk’ was playing. Football is a brutal game. It really is. A guy like that, a young guy that’s made some good strides and had some good reps for us last year. You just feel for him, feel for this team.”

As a result of Hawkins now being sidelined, Steelers rookie tackle Chukwuma Okorafor will more than likely be expected to be the team’s swing tackle this season and so far, he seems to be impressing his fellow offensive linemen during OTA practices.

“He looks well, he looks good, man,” DeCastro said of the team’s second of two third-round draft picks this year. “He can move really well. He’s got a prototypical body type so looking forward to kind of seeing him put some pads on and learn. I remember my rookie year, my head was spinning in OTAs and now I’m like kind of half asleep going through this stuff. So, it’s funny how things change, but I know where he’s at and I’m excited to kind of just watch him grow.”

Part of Okorafor growing quickly this offseason will included him playing both left and right tackle and DeCastro was asked Thursday if that will be a big challenge for the Western Michigan product.

“Yeah, I think one position is a challenge so two is definitely a challenge,” DeCastro said. “But he’s got the ability to do it and a good coach to mold him.”

Even though two Steelers players suffered what appear to be season-ending injuries on Wednesday, DeCastro doesn’t question the process of OTAs and how veterans are encouraged to practice along with new players in May and June.

“No, I mean they are are non-contact injuries,” DeCastro said. “It wasn’t like it was anyone falling or going too hard. I mean, guys have got a pretty good pace and get an understanding of cooperation out here. Every now and then guys go a little too hard, but at the same time it’s football. Like I said, you can’t ever plan on it. You never know when it’s going to happen and what’s that saying? You can’t live your life scared. At the same time, It’s just tough, it’s just part of it.”