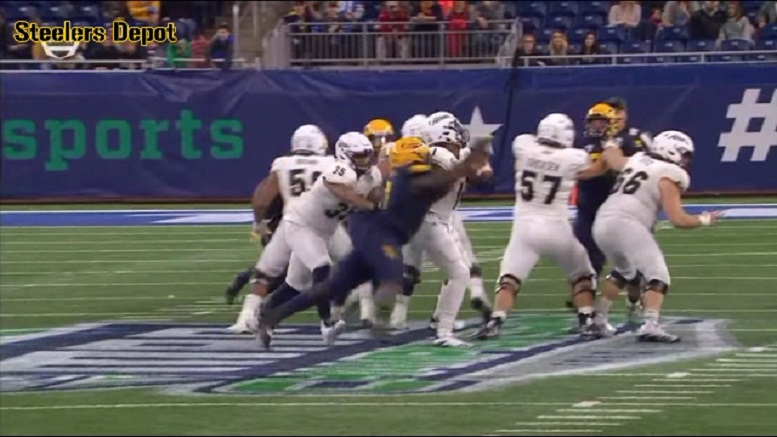 Olasunkanmi Adeniyi was one of the 13 undrafted free agents signed by the Pittsburgh Steelers several weeks ago and the Toledo product received a $15,000 signing bonus as part of his three-year contract that he signed. The high-priory undrafted free agent edge rusher certainly now has a legitimate chance to make the Steelers 53-man roster as a rookie thanks to the team failing to address the outside linebacker position during free agency as well as the draft.

Adeniyi, who measured in at this year’s scouting combine at 6011, 248-pounds and with 31 3/4-inch arms, registered 12.5 sacks at Toledo over the course of three seasons with 8.5 of those coming in 2017. I was able to find all 8.5 sacks that Adeniyi registered during the 2017 season this morning and have compiled them, along with a few replays of each, in one video in order to contextualize them as far as overall quality goes.

As you can see in the video and play-by-play breakdown below, several of Adeniyi’s 2017 sacks were of high quality. Only one went in the books as a half a sack as well. Adeniyi was also able to register sacks from both the right and left sides in 2017 and most came with him standing up. Both of those facts are encouraging.

At the very bottom of this post are links to the seven full games that these sacks were pulled from if you would like to watch more of Adeniyi.