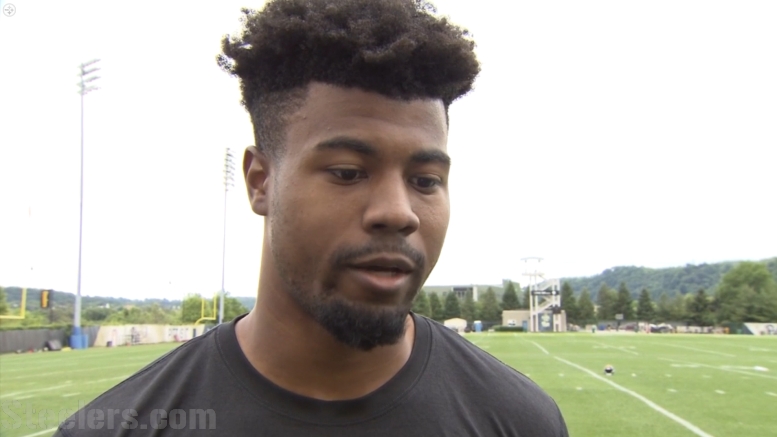 After missing a good part of his rookie season with a hamstring injury, Pittsburgh Steelers cornerback Cameron Sutton managed to return to play some in the team’s five regular season games on his way to registering just a little less than 120 total defensive snaps played. This season, Sutton figures to, at worst, play the same dimeback role that now former Steelers cornerback William Gay played last season in the defense. With that said, the Tennessee product reportedly said at the conclusion of the Steelers Thursday OTA practice, the team’s sixth one of 2018, that he’s played a lot of different positions so far and that includes him seeing some at nickel, corner and safety.

“I’m just moving around with different groups out there on the field, getting reps with all the different positions,” Sutton said Thursday, according to Lauren Kirschman of pennlive.com. “The more you can do, the versatile you are, the more opportunities you have for yourself and opportunities to help this team win.”

While being asked to play all those different spots certainly can be challenging for a second-year player, Sutton, who coming out of college was deemed a very smart defensive player and one who knew where every player on the field should be and what their individual roles were on every play, seems to be the perfect choice to be the Steelers Swiss Army knife defensive back moving forward.

Not long after the Steelers drafted Sutton, Bob Shoop, who was the defensive coordinator at Tennessee at the time, spoke glowingly about the young cornerback and how smart he is and how he impressed general manager Kevin Colbert and head coach Mike Tomlin when they spent extra time with him watching film last spring.

While there was a lot of speculation early in the offseason that Sutton might move to free safety in 2018, Colbert put the kibosh on such a move prior to this year’s draft.

“Fortunately, Mike Hilton proved that he can be that third, that slot corner, and Cam [Suttton] has that ability as well, but he also can play outside and he’ll stay in the corner rotation, I’m sure, unless something else would happen,” Colbert said. “But he’s a corner, he’s a smart cover guy that can play outside. And he knows what to do on the inside, he just hasn’t had the reps in there because William Gay backed up Mike Hilton in that spot last year and when we got Cam healthy and ready to go, we were already eight games into this thing and it was hard to throw him into the mix.”

The Steelers apparently haven’t focused too much on their dime packages so far this offseason but when they finally do, Sutton figures to get plenty work in that personnel grouping just as Gay did last season. In the meantime, it sounds like Sutton is getting plenty of reps both inside and outside with the Steelers now more than halfway through their OTA practices.

“Wherever they need me at, whatever my spot or position is, I’m going to go out there and give it everything I got to the best my ability and just try to make plays,” Sutton said.

Sutton, who was drafted by the Steelers in the third-round last year, registered a defensed pass and five total tackles during his very limited playing time last season.