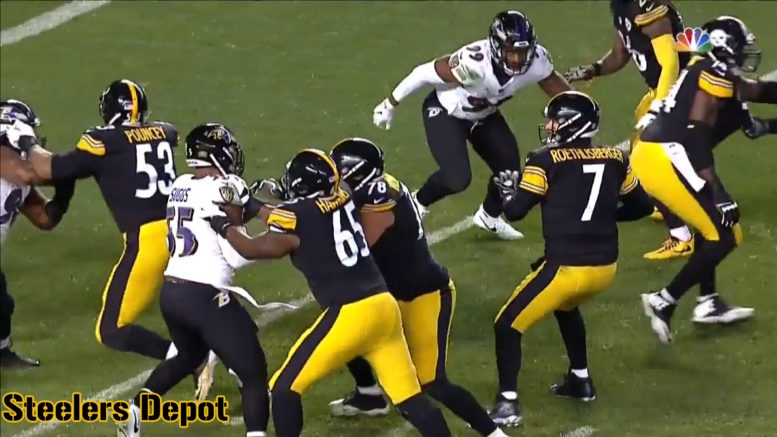 The primary focus of the first wave in this series is to reflect the outcome of the 2018 NFL Draft and how that affects the players on the 90-man roster. So while third-year tackle Jerald Hawkins will have benefitted from the free agency departure of Chris Hubbard, his status took a more recent blow with the Steelers’ selection of tackle Chukwuma Okorafor in the third round.

Okorafor may be considered a ‘developmental’ player, but let’s face it, so is Hawkins. He was an underclassman when he came out and spent his rookie season on injured reserve after appear in only one preseason game.

He came back in year two and struggled all throughout the spring and had a very inconsistent training camp and preseason schedule. For the first half of the season, he was in disfavor, with Matt Feiler dressing over him when another tackle was needed even though Feiler had spent the entirety of the year working at guard.

He did work is way past Feiler in the second half of the season and was Hubbard’s backup in the four games that Marcus Gilbert missed due to suspension. The Steelers got him some work during and around that time as a tackle-eligible, making his NFL debut in the game against the Packers, but, again, he had mixed results.

So anybody assuming Okorafor can’t come in and win the backup tackle job, and perhaps even threaten Hawkins’ roster spot altogether if they only keep eight linemen, is jumping the gun. Hawkins is not much more proven than is the rookie, who has greater upside and would be unlikely to make it to the practice squad as a third-round pick.

He was a three-year starter at Western Michigan, the only school outside of a Power 5 conference to see a lineman drafted in three straight years, and he played at both left and right tackle. At 6’6”, 320 pounds, and just 20 years old, Okorafor is now the intriguing new tackle while Hawkins is still just trying to find a role.