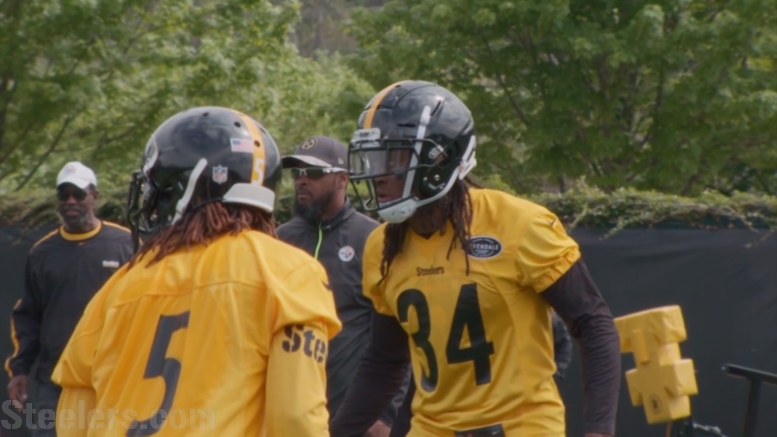 It is very early on to be talking about the Steelers’ rookie draft picks, but it is still an appropriate time to do so as we come out of the team’s rookie minicamp, which has given us our first taste of the new players on an on-field setting, at least vicariously.

Second-round wide receiver James Washington received a ton of praise about his performance during the three-day practice sessions, which I talked about yesterday. I also covered offensive coordinator Randy Fichtner’s comments that he offered on Washington earlier today.

But first-round draft pick Terrell Edmunds has been another obvious source of attention, as will pretty much always be the case when you’re dealing with somebody who is added to the team that early on in the draft.

The Steelers didn’t waste time with their new safety, trying to throw a lot at him and stretch him out as much as possible. While he said that he wasn’t really at liberty to talk about the full range of what he was asked to do, he did confirm that he spent time working at the linebacker position, which is a role he would likely serve as a sixth defensive back.

Edmunds said that he didn’t get work at cornerback—at least not on the first day, which is the day that the spoke to reporters, so for all we know he could have worked a bit with that group on one of the other two days. He did offer that the coaching staff was active in installing him into a communications role, as was the other safety, Marcus Allen.

That said, we didn’t necessarily get a ton of actual first-hand accounts regarding how he looked on the field. The details were more about what he was doing than how he was doing. But at least it appears that he was able to handle the load of information, telling reporters that he didn’t feel it was too much.

Defensive coordinator Keith Butler did offer that he felt Edmunds was going to be capable of being a strong communicator on defense based on what he saw during his first exposure to the young man on the field, also complimenting his versatility.