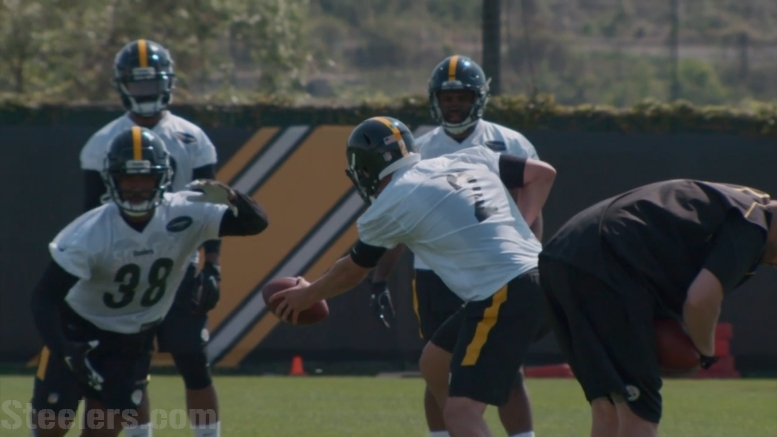 Stocks are a fickle composition of speculation, reacting, sometimes wildly, because people think that something might happen. That is basically where we are with the Steelers’ rookie class as they come out of their first three days on the field, only working with other rookies and first-year players.

What little information we have to work with so far is a couple of short video clips of players working out and what they and others have had to say about one another. But in the case of a player like Jaylen Samuels, the fifth-round running back out of NC State, we can make a bit clearer of a positive or negative evaluation.

The college H-back who was used in a variety of roles for his team confirmed to the team’s website over the weekend that the coaching staff did have him working at different spots on the field during practice. In addition to taking reps out of the backfield with the running backs, he also worked in the slot and on the outside during receiving drills.

Samuels was becoming a fairly prolific receiver out of the slot during his last couple of seasons in college, and if he could bring that receiving aspect to the table, it would greatly increase his value and the likelihood that he makes the team.

The most important thing he can do for himself right now is to show that he is a quick study though. There is nothing more valuable to a rookie at this stage of the game than demonstrating the ability to get the playbook down quickly, aside from showing that he doesn’t make the same mistakes twice.

It’s so far so good for Samuels, and really for the entire rookie class, though it’s pretty uncommon that anybody has much in the way of negative things to say about a draft pick so early in the process. That’s kind of the territory with football in shorts.

Still, many do maintain that you can tell pretty much right away the guys who are not going to make it. None of the rookie class has seemed to have been given that marker, and Samuels is among those who have elicited some excitement, even if it is still very early.