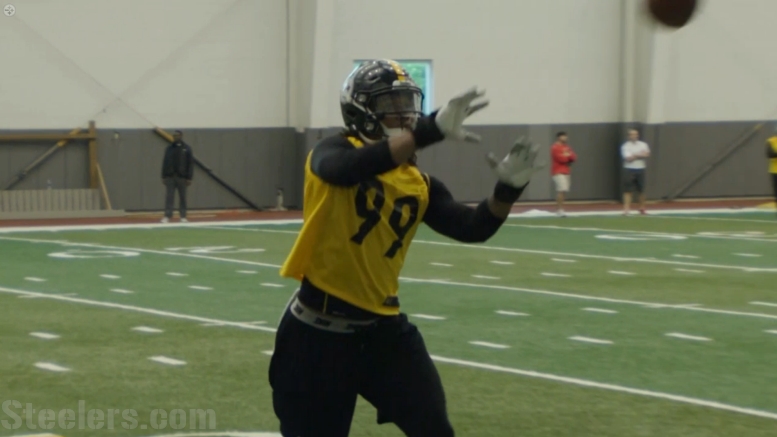 Don’t you love it when General Manager Kevin Colbert talks about a player who was injured during his rookie season as though he is an additional draft pick? That always works out well. It’s happened in the recent past with Jordan Zumwalt, Senquez Golson, Jerald Hawkins, and now most recently with 2017 seventh-round draft pick Keion Adams.

Colbert once again alluded to Adams as a bonus because he spent the 2017 season on injured reserve. He only made it through about a week’s worth of training camp practices before he suffered a shoulder injury that shelved him for the rest of the year, not even getting into a preseason game

But he does have a good chance of making the roster at the very least, and will probably open OTAs as a second-team outside linebacker following the departures of James Harrison and Arthur Moats. Behind T.J. Watt and Bud Dupree as starters is only Anthony Chickillo, entering his fourth season.

The only other outside linebackers on the roster are all undrafted free agents, including Farrington Huguenin, who was on the practice squad last year, and Olasunkanmi Adeniyi, who was part of this year’s priority free agents. Though listed as a defensive end, Darnell Leslie will be a part of that group as well.

It’s not exactly a murderers’ row of talent here after Pittsburgh declined to draft an outside linebacker during the 2018 NFL Draft. It’s possible that they will still make a modest move, such as bringing back Moats for another year, but for now it’s hard not to pencil in Adams for a roster spot.

The Steelers have gone into a season with as few as three outside linebackers on the roster, however, as in 2014. Jarvis Jones, Jason Worilds, and Arthur Moats were the only ones until Jones was injured and Harrison was signed out of retirement. They did have Howard Jones on the practice squad.