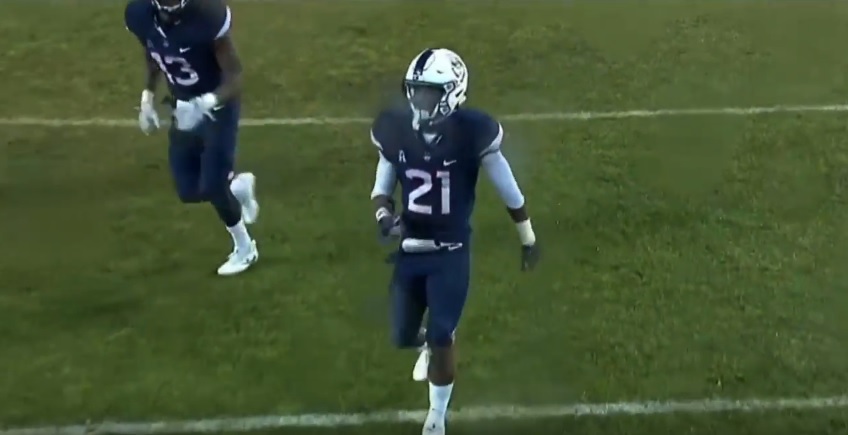 With the draft over and our profiles on all seven of the Pittsburgh Steelers draft picks complete, we’re dipping our toe into the undrafted territory. We profiled a couple of them before the draft but most of the 13, we didn’t. Next, we’re looking at one of the lesser known players brought in. UConn corner Jamar Summers.

– Slightly above average athlete who tested well (4.55 40, 37.5 vert, 10’5″ broad, 6.85 three cone)
– Good IQ player who doesn’t seem to make many mental mistakes in coverage
– Willing tackler in the open field
– Experience playing the field and boundary, both outside corner spots
– Does well to funnel receivers in underneath zone coverage and maintain outside leverage in run support
– Doesn’t take a ton of chances able to stay in-phase in coverage, shows fluidity in his turn and ability to play man-to-man, doesn’t open his hips late and risks getting beat
– Productive player with extensive starting experience
– Versatile, experience mostly at corner but played some safety later in career
– Good hands and ability to finish plays, capitalize on the football (in terms of interceptions)
– Durable, didn’t miss much time

– Average size/frame, appears to lack length
– Has trouble tracking the football over his shoulder, lack of size and length makes it difficult for him to make plays on the ball over the top or when he’s closing downhill
– Needs to be a more aggressive tackler, drag down type who doesn’t always get as involved unless he has to
– Doesn’t show great explosion out of his backpedal in off man/zone coverage versus underneath breaking routes, can struggle with balance and being able to drive on the football
– Conservative mindset makes it easy for receivers to sell vertically on him, getting him to open his hips early and allow far too much space underneath, too easily manipulated by head fakes and stems of a receivers route
– Occasional frustration that leads to dumb penalties

Maybe this is my fault and I should have taken a longer look at his 2015 tape, where the stats were genuinely awesome, but I ended up focusing on 2017 because that was the best tape I had available. Usually don’t lead off with the conclusion but long story short, I think a move to free safety is Summers’ best shot at sticking in the NFL.

He has the hands and playmaking ability to play that spot. The speed, the physicality though? Not as much, and I think that’s going to hurt him at corner. I don’t have any specific clips but sifting through his INT reel, Summers has soft hands and the ability to finish plays. You don’t just stumble into eight interceptions.

He’s a smart player who rarely looked lost or out of position. Even when others struggled around him, Summers played as technically sound as possible, once playing a midpoint technique and splitting #1 and #2 receivers when both when vertical and he was the only one to cover.

Summers looked capable in man coverage when playing off man or zone. Against Missouri, bottom of the screen in this GIF, flip his hips, get in-phase and to the inside hip of the receiver, and run with him downfield.

On the downside, despite good hands, that doesn’t mean he’s always a great player with the ball in the air. He makes plays on QB mistakes and when he’s able to undercut routes, that’s thanks to his football IQ, but a lack of size and length really hurts him at a lot of catch points. Struggles to find the ball over the top or making a play on the ball on slants/crossers when he can’t get in front of the ball.

Again, from the Missouri game, he can’t find the football, terribly mistiming his jump, and it’s an easy TD.

Like I also wrote in the report, he is a pretty conservative player in coverage, probably due to a lack of top-end speed that can get him beat near the end of routes (the 4.55 helps show that, too). Afraid to get beat over the top, he flips his hips at the first sign of trouble here. Receiver turns him around, runs his route underneath, and it would’ve been a pretty easy completion. Bottom of the screen below.

Of course, you don’t want to be on the other end of things and let receivers eat up your cushion – as the saying goes, if they’re even, they’re leavin’ – but Summers seems particularly conservative and not a very explosive player out of his pedal, unless he’s in trail coverage and able to read the receivers hip the entire way (and that isn’t in his pedal, obviously).

With a little lack of size, length, and speed, I’d put him at safety. Based on the tape alone, he looks to be a good enough communicator and the ability to find the football, letting him be a little more aggressive. If he is going to stay at corner, a Cover 3 scheme is ideal, creating space between he and the receiver and letting him make more plays driving on the ball and reading the route/throw, instead of trying to win with an average set of physical tools.