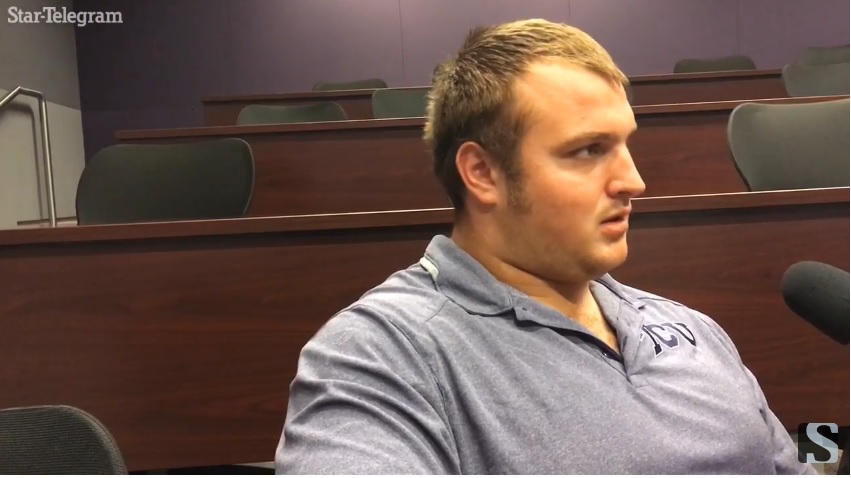 With the draft over and our profiles on all seven of the Pittsburgh Steelers draft picks complete, we’re dipping our toe into the undrafted territory. We profiled a couple of them before the draft but most of the 13, we didn’t. The only one we haven’t covered is TCU center Patrick Morris, which we will do today.

– Excellent play strength, derived from great technique
– Plays with proper base and maintains it while sliding in pass protection
– Does well to repunch/re-position his hands in pass protection, proper placement and keeps his hands inside
– Above average athleticism and snap off the ball, able to execute reach blocks versus shaded DTs
– Great grip strength, defenders have a difficult time disengaging
– Uses his length well in pass protection
– Keeps lower half moving in run game and generates a good push on base blocks and double-teams
– Powerful and impactful cut blocker
– Tested really well at Pro Day workout
– Versatile, experience at center and left guard

– Average frame and length, doesn’t look physically imposing
– Can get overwhelmed by bull rushers and defenders who have size/length/strength advantage on him
– Nothing special in space, has trouble executing blocks on screens
– Injury history, missed large chunk of senior season
– Starting experience is only average

Morris quietly was signed as one of the Steelers top UDFAs, if you use signing bonus as your gauge. only Olasunkanmi Adeniyi and Greg Gilmore got more than Morris’ $10K to sign. When you watch him, you can see why, and I think the only thing that held him out of getting drafted was a lack of experience, a senior season marred by an early injury. There’s some legitimately good tape out there.

Although Stanford All-American Harrison Phillips beat him on the first play of the game, Morris won most of the rest of the matchups. Watch him, as the center, reach Phillips, set his hips and seal him, and then get his arm inside of him and run step-for-step the rest of the way.

Morris plays with proper leverage, hand placement, and has great grip strength. When he gets his hands on you, run or pass, you aren’t working off the block.

On tape, there aren’t a ton of negatives out there. You can look to the injury he suffered and a lack of starting experience as a whole, especially at one position. I did mention that first rep versus Phillips, which was ugly, Morris falling off the block and Phillips making the TFL.

Here’s a good feature piece on him if you want to check him out some more.

He’s a RARE athlete the way he tested. According to NFL Combine Results, which has data since 1987, only one center has ever had a better broad than his 9’9″(Daniel Palmer in 1997), and only one bettered his 35.5 inch vert (Ben Miller in 2003). It’s worth pointing out both of those guys went to the Air Force and Miller weighed only 263 pounds.

Compare him to guards and only two have better broads (Randall McDaniel in 1988, who has only 268 pounds, and Eric Steinbach in 2003, who became a Pro Bowler). Only Steinbach and Mathias Nkwenti (a Steelers draft pick) had better verts.

Put it like this: Patrick Morris had a better three-cone than Bud Dupree and only trailed James Washington’s short shuttle by .1 of a second.

Point is, Morris definitely earned his freaky title for what he’s done in the weight room and his explosion numbers. And there’s good tape to back it up too. He’s far from a workout warrior. Morris had to adjust to TCU’s Air Raid offense, even redshirting his sophomore season to be able to adjust, and was an asset for the Horned Frogs throughout his career.

I think he has a legitimate shot to make the practice squad and take a B.J. Finney-type route to an NFL roster someday.