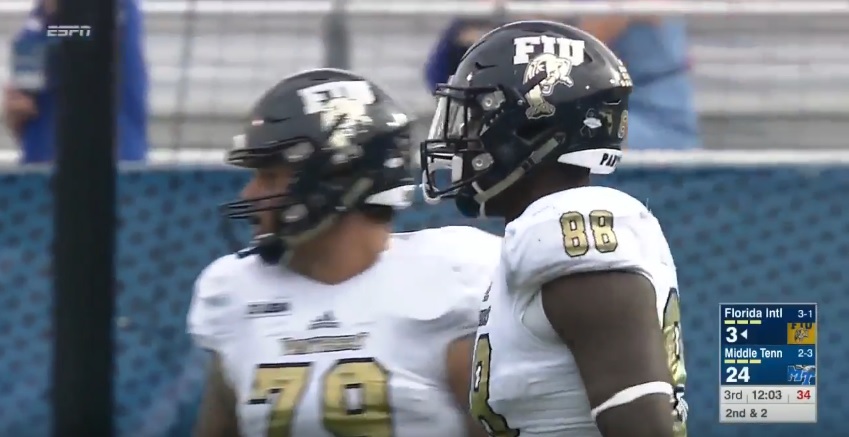 With the draft over and our profiles on all seven of the Pittsburgh Steelers draft picks complete, we’re dipping our toe into the undrafted territory. We profiled a couple of them before the draft but most of the 13, we didn’t. Next up on the docket, TE Pharoah McKever.

– Excellent frame and length, towers over most players and a unique build
– Willing blocker whose frame helps create space in the run game
– Experience in pass protection and did a serviceable job at it
– Most often lined up as an in-line tight end out of a three-point stance, not foreign to him
– Big catch radius and hands catcher who makes grabs away from his frame
– Shows toughness and willingness to come over the middle and make catches in traffic
– Size makes it tough to bring him down one-on-one, minor YAC ability the few times he’s gotten in the open field
– Relatively new to the position, room to grow

– Limited route tree, most concepts were underneath, haven’t seen him be able to stretch the field
– Too tall in his routes and struggles to beat press coverage
– Unrefined as a blocker, needs to keep eyes up, square to block and narrow his base a bit
– Doesn’t seem to have a great feel for getting open beyond the structure of the play, has to be more active running away from man and finding soft spots in coverage
– Wasn’t much of an impact player with limited college production

Oh boy, there’s a lot to unpack here. His story is just as interesting as is the actual position he’s playing, tight end. Let’s look at how he performed at tight end last year though for the bowl-bound FIU squad. What I assume was intiruging to Pittsburgh was how often McKever played as an in-line tight end. How often he blocked, even in pass pro, something that’s pretty rare for college tight ends who act as glorified receivers.

And while McKever is far from the best, he gave good effort and used his length and frame to get in the way in pass blocks and seal the edge in pass protection. Here’s a look at the latter. Bottom of the screen vs the LDE.

And though his route tree was limited, when the ball was in his hands, he was a load to bring down. Tough guy over the middle. Watch him extend for this ball, take the hit, and stay on his feet.

But he’s a build-up speed tight end who didn’t get to do much of that in his route tree. Very simplified. Basically a flat, out, and Hank (5 yard curl over center). And because he is so tall, a legit 6’6, he is an upright route runner who  is easily pressed. Watch the LB jam him the first five yards and even when McKever shakes free, the ball goes through his hands.

McKever is a well-traveled player, both in school and position. Came to the Wolfpack as a WR, then moved to DE, then to TE right before the 2015 bowl game, where he caught an 82 yard touchdown. In 2014, he had this sweet pick six dropping into coverage.

And in 2016, his biggest impact came blocking this punt against Notre Dame, using his length to his advantage. It was the game-winning touchdown in a muddy game.

So he’s an interesting guy. The size, the NFL experience in college, a guy who obviously has the football IQ to bounce around the way he did and not really miss a beat. Tight end depth is thin, aside from the three favorites on the 53 man roster (McDonald, James, Grimble) the only other competition is Jake McGee, who did well in camp last year, but it wouldn’t be impossible for McKever to leap over him.