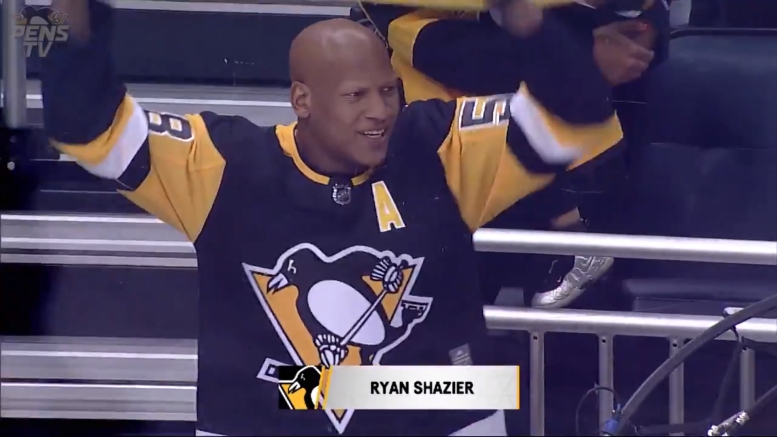 We may not know when or if Pittsburgh Steelers Pro Bowl linebacker Ryan Shazier might ever return to the field with the team, but we do know that he is and will remain very much a part of the city, and Pittsburgh has continued to embrace him, as he has of the city, with open arms.

Still recovering from a severe spinal injury that left him temporarily paralyzed in early December, Shazier has continued to make steady progress in the five months since the injury, and has seen fit to demonstrate that progress on a number of occasions with all eyes on them.

The biggest example of that came last night as he helped to get the crowd fired up from a front-row seat at the Pittsburgh Penguins’ playoff opener against the Philadelphia Flyers. Microphone in hand, he goaded the crowd into a pre-game frenzy on an evening that ended with a true battering of Pittsburgh’s cross-state rivals.

It was a feel-good night for Pittsburgh all around—short of the Pittsburgh Pirates, in spite of the fact that they are off to a surprisingly good start of the season as well (yes even without Andrew McCutchen). To have the night led off by the best sight yet of Shazier followed by the complete domination and occasional magic show that is the Penguins and Sidney Crosby should have people in a good mood.

The truth is that it is actually easy to lose count by now the milestones in the linebacker’s road to recovery. It was in about early January that we learned he had regained feeling in his legs. Later that month, he attended a team practice ahead of the Steelers’ Divisional Round loss while seated in a wheelchair.

At the start of February, Shazier was discharged from inpatient therapy at UPMC, now continuing to undergo outpatient therapy, including a ‘walking routine’. Shortly after that, he stood publicly for the first time while attending a Penguins game.

He did so again late in February while in attendance at an awards dinner in which Steelers General Manager Kevin Colbert was honored. As a matter of fact, he stood up twice. In the middle of March, less than a month ago, he even posted a video of himself getting some work in at the gym.

It’s been a long road already with many mile markers along the way, and we and the city of Pittsburgh have been and will continue to be with him for the duration of the journey. It’s obvious every time he makes an appearance how much the city is behind him and how much that means to him.