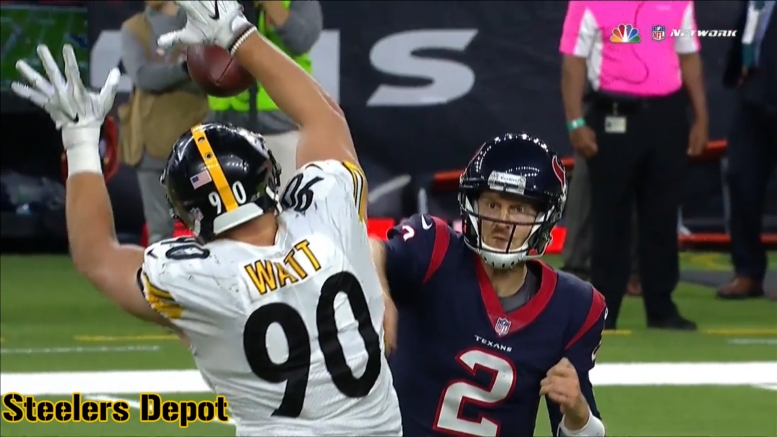 Pittsburgh Steelers outside linebacker T.J. Watt came into his rookie season last year well-prepared for somebody who had a limited history of experience actually playing at his position. Part of that was simply how he is built, but he also had plenty of advice from his older brothers already in the NFL.

One thing that he found he had to learn on his own, however, is just how big the stakes are for every play at the NFL level in comparison to what he experienced in college. A day-one starter, he even watched the intensity of every snap grow as the season went on, and then escalate in the postseason.

But, he said, “the thing a lot of people don’t realize is how much weight is carried on every play. As you advance in the postseason that kind of grows exponentially”. That was the most significant lesson he had to learn during the 2017 season.

the 2017 first-round pick spent the spring and summer impressing his coaches with how well he was doing. Joey Porter, his position coach, was the first to essentially declare him the starter and said at one point during training camp that he could count on one hand the number of times he made a mistake, and never the same twice.

“As you do have those mess-ups the coaches evaluate how quickly you can forget, move on and try to not make the same mistake over again”, Watt recalled of his first summer in Latrobe. “I think that’s something I pride myself on is not making the same mistake twice. As you get success, you kind of have to re-humble yourself and keep staying hungry for more. I think I’ve done a great job, whether I’m playing good or bad, of just always being hungry to be a better player”.

Watt recorded 15 starts in 15 games during his rookie season, missing one game due to an injury. He recorded 54 tackles, an interception, seven passes defensed, and a forced fumble to go along with seven sacks, which was the second-most by a rookie in team history.

The Steelers are counting on him to become a true difference-maker off the edge, both rushing the passer and in coverage. He had a moderate amount of success in both areas, but there remains room for growth.