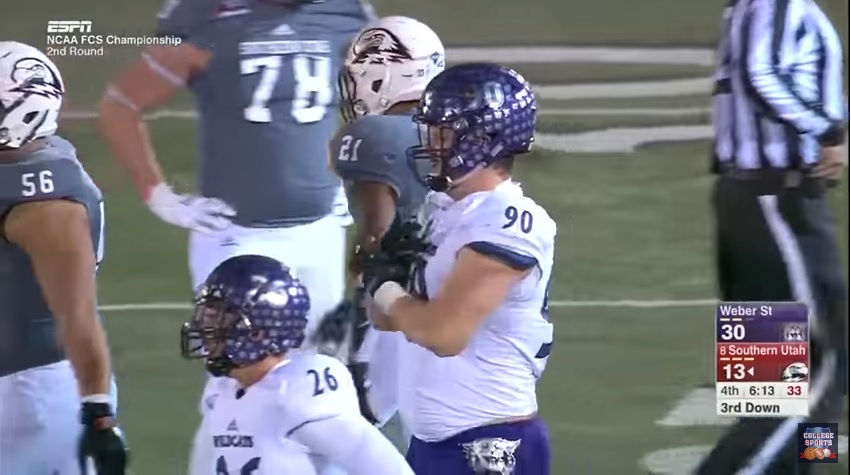 The Pittsburgh Steelers are showing interest in a potential small school sleeper along the defensive line, according to a source close to Steelers Depot. Team scouts were impressed with Weber State DL McKay Murphy’s workout, according to our source, held back on March 28th.

Standing in at 6’3 295, he reportedly ran a 4.95, jumping 31 inches in the vert, and 7.2 in the three cone, impressive numbers across the board. While a left shoulder strain capped his bench reps at 24, he said in training, he repped as many as 39. I’m told the injury was minor and is no longer an issue. He put in that performance despite being very sick the night before, losing five pounds because of it.

At the end of his workout, Steelers scouts had him go through offensive line and fullback drills too. They’ve kept in contact with him after his Pro Day too. Murphy is currently viewed as a free agent but the impressive workout now has teams on his radar with that level of athleticism.

2017 was a breakout year for him, racking up 40 tackles (14 for a loss) and four sacks, career highs across the board and good enough to make him first team All-Big Sky. He finished his Weber State career with 19.5 TFL and five sacks. Those career numbers were hindered by a torn ACL he suffered in 2015.

Murphy began his career at Utah before transferring to Weber State. He’s the son of former MLB All-Star Dale Murphy, who appeared in seven All-Star games throughout his baseball career. 30 teams were at Weber State’s Pro Day, a record number, partially due to the interest in CB Taron Johnson, who is almost certainly going to be selected somewhere on Day Three. For Murphy, it was a chance to get some serious exposure and it sounds like he didn’t disappoint.

Even with the Steelers recent signings, there will still be plenty of spots on their 90 man roster to fill out with undrafted free agents. Keep an eye on Murphy coming into camp with the team.