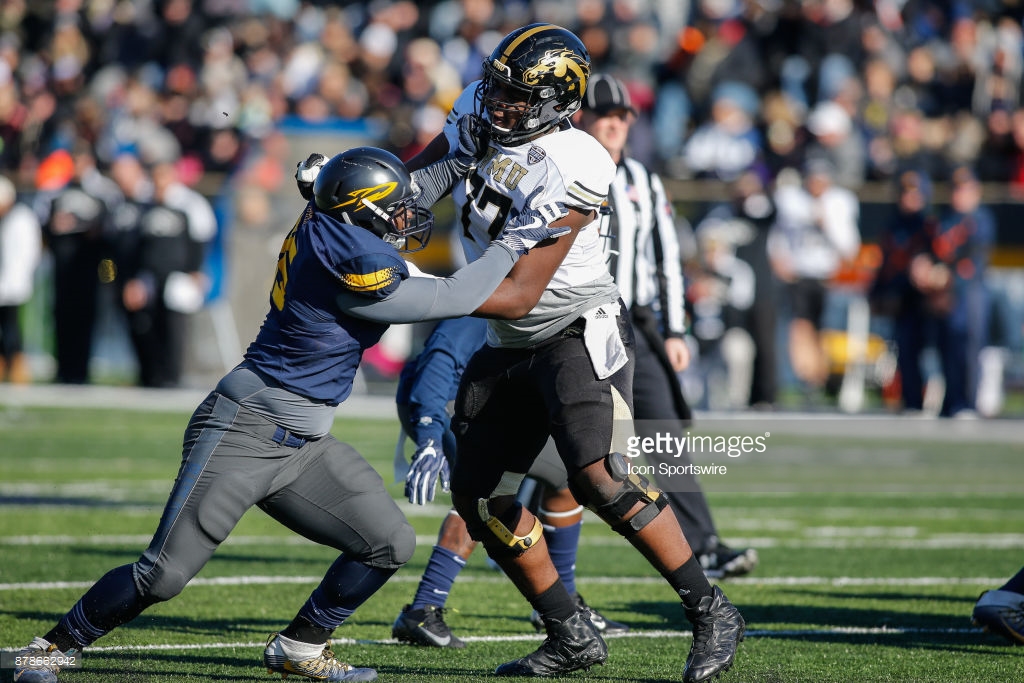 Okorafor measured in at this years combine at 6060, 320-pounds and he ran the 40-yard dash in 5.31-seconds. He played a lot of left tackle at Western Michigan. He was also a 2017 Outland Trophy Semifinalists.

A three-year starter for the Broncos (6-4) who has been ranked as the No. 4 offensive tackle by Mel Kiper Jr. going into the 2018 NFL Draft. He played right tackle his first two seasons then moved to left tackle at the beginning of the 2016 season and has been a fixture there since. He has started every game the last three seasons for a productive offense.

Chukwuma Okorafor (pronounced chuck-WOO-muh oh-KOR-uh-for) and his family immigrated from Botswana to the United States in 2010, so he got a late start on learning football. Despite eventually getting recruited by football’s biggest powers, he stayed in Michigan to play for Head Coach P.J. Fleck at WMU. Okorafor played as a reserve in 12 games in 2014, then started every game at right tackle as a sophomore. He switched to left tackle for his junior year after the departure of Willie Beavers for the NFL, earning first-team All-MAC honors for his efforts, using his wide body and length to protect the quarterback and blast holes for running back. Okorafor received numerous All-American accolades and a first-team all-conference nod for his play as a senior in 12 starts at the left tackle spot.

Okorafor’s size and potential will likely get him drafted earlier than where the tape says he should go. While he has plus physical traits, inconsistencies with balance and instincts could be a challenge to correct. He has the feet to handle speed rushers, but multi-move rushers could eat his lunch early on. Okorafor will need to play with much better consistency and toughness on the next level to become an average NFL starter.