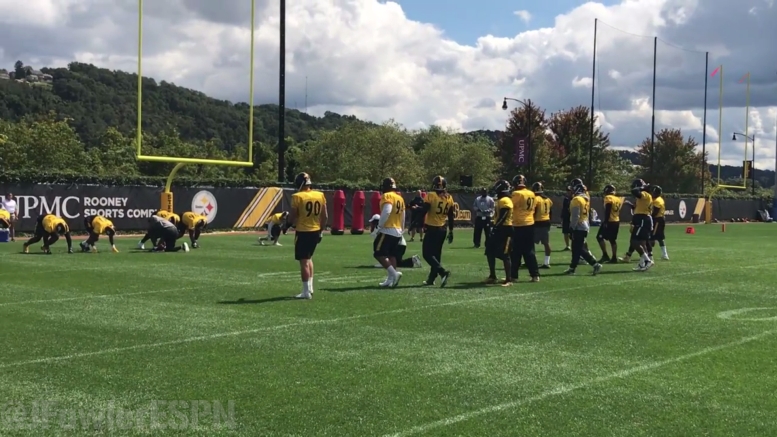 It may be draft season for you and me, but for the Pittsburgh Steelers, they’re back in the weight room. Today kicked off the start of Phase One of the offseason with players returning to UPMC Rooney Sports Complex, the team’s practice facility, to begin offseason workouts.

For any player, it’s the chance to build on 2017. But it’s especially important for the teams newest faces and those who didn’t have an offseason a year ago. Players like Vance McDonald, traded from San Francisco late in the preseason, who had to get on Mike Tomlin’s moving train in a hurry.

“There is no stress of football and game planning right now,” McDonald told the team website. You get the time to know and enjoy all of the people in the building, not just the players but the people all throughout the organization. Not only that, but there is a sense of comfort being able to spend months getting ready, without the stress of the season.”

There aren’t any actual practices during this time and most of the work is contained to the weight room. But one of Tomlin’s biggest points of emphasis is having the most well-conditioned team. A process that begins now, not in Week One of the regular season. Phase One will last two weeks before moving onto field work and finally, OTAs. Those begin May 22nd with ten practices from then until June 7th. After that will be a three day mandatory minicamp that runs from June 12th through the 14th.

Spring work is a time when we hear rumblings of a potential camp sleeper, too. Recent history actually gives a solid Steelers’ track record. It was Terence Garvin who first pointed out Eli Rogers in 2015.

“Eli caught a lot of eyes, he did a lot of good things,” Garvin told PennLive back then when Rogers was an obscure UDFA. “I definitely see him a lot.”

Last year, Mike Hilton caught the attention of veteran teammates like Ramon Foster, who asked Kevin Colbert who that #40 was.

“Who is this guy?” Foster said. “He’s comfortable going with the ones. He’s a guy that’s always making a play. He’s shifty, he doesn’t look rattled.”

Both those players made the roster and became contributors to the team. Hilton is the Steelers’ starting nickel corner and Rogers has had a starting role for parts of his career and could return to the team once he recovers from his torn ACL.

As easy as it is to dismiss spring hype, it’s not all smoke and mirrors. Picking a surprise candidate is always going to be impossible, or else it wouldn’t be a surprise, but safety Malik Golden had a strong camp last season before tearing his groin. With a year under his belt and safety still not the deepest position in Pittsburgh, he could make a push for the 53.