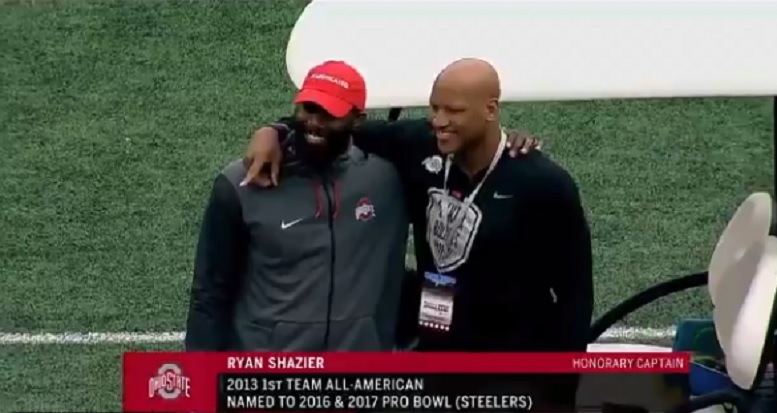 Ohio State is holding their annual spring game on Saturday and Pittsburgh Steelers linebacker Ryan Shazier is one of two honorary captains for the event.

Joining Shazier as an honorary captain on Saturday is Philadelphia Eagles safety Malcolm Jenkins, who also is an Ohio State alumni.

“I’m thrilled and I can’t wait to see these two heroes back in Ohio Stadium,” Ohio State head coach Urban Meyer said this past March. “The respect and admiration I have for each of these young men is off the charts, and I am so proud for our program and for the Ohio State fans that these players want to come back and be a part of our spring game.”

Shazier played three seasons at Ohio State from 2011 to 2013 and the Steelers drafted him in the first-round of the 2014 NFL Draft with the 15th overall selection. Currently, Shazier is sidelined indefinitely by a serious spinal injury that he suffered last season and thus will not play in 2018.

As you can see in the pictures and video included in this post, Shazier is being videoed and photographed while standing more and more and that certainly is great news. The hope still is that he’ll make a full recovery and potentially even resume his NFL career starting in 2019.

“Every day I’m getting a lot better, I’m able to move around a lot more” Shazier told ESPN on Saturday. “I’m doing a thousand times better than I was in December and I’m just thanking everybody and all the prayers because that’s definitely helping me get a lot better.”

The Big 10 Network is airing today’s Ohio State spring game if you are interested in watching it.

It'll be tough to top this @B1Gfootball spring moment.

So great to see former @OhioStateFB star LB @RyanShazier back in Columbus. pic.twitter.com/LFGdVFpzEy