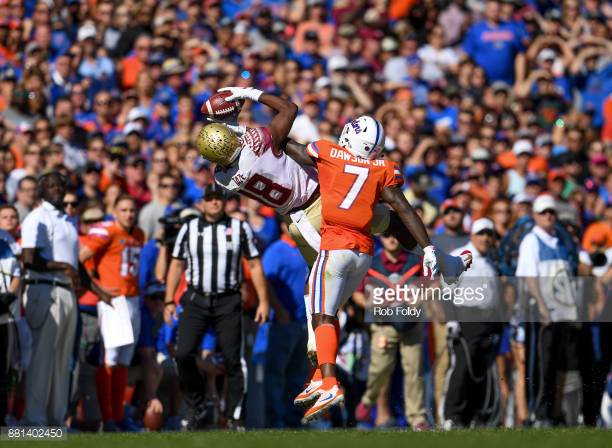 Dawson, who measured in at this years scouting combine at 5105, 197-pounds, ran the 40-yard-dash in 4.46-seconds. In his four seasons at Florida he registered 82 total tackles, 6 interceptions and 17 total pass breakups. He is considered to be one of the top nickel cornerbacks in this years draft class and expected to be drafted somewhere during day-two.

Iyiegbuniwe, who measured in at the combine at 6013, 229-pounds, ran his 40-yard-dash in 4.60-seconds. In his four seasons at Western Kentucky he registered 200 total tackles of which 22.5 resulted in lost yardage. He also had 6.5 sacks in the 44 games he played in along with 3 forced fumbles and 4 pass breakups. e is expected to be a late day-three selection in this year’s draft.

As for Roback, he threw for 8,653 yards and 57 touchdowns over the course if five seasons at Eastern Michigan. He is listed at 6-3, 218-pounds on the school’s website. Roback figures to go undrafted this year.