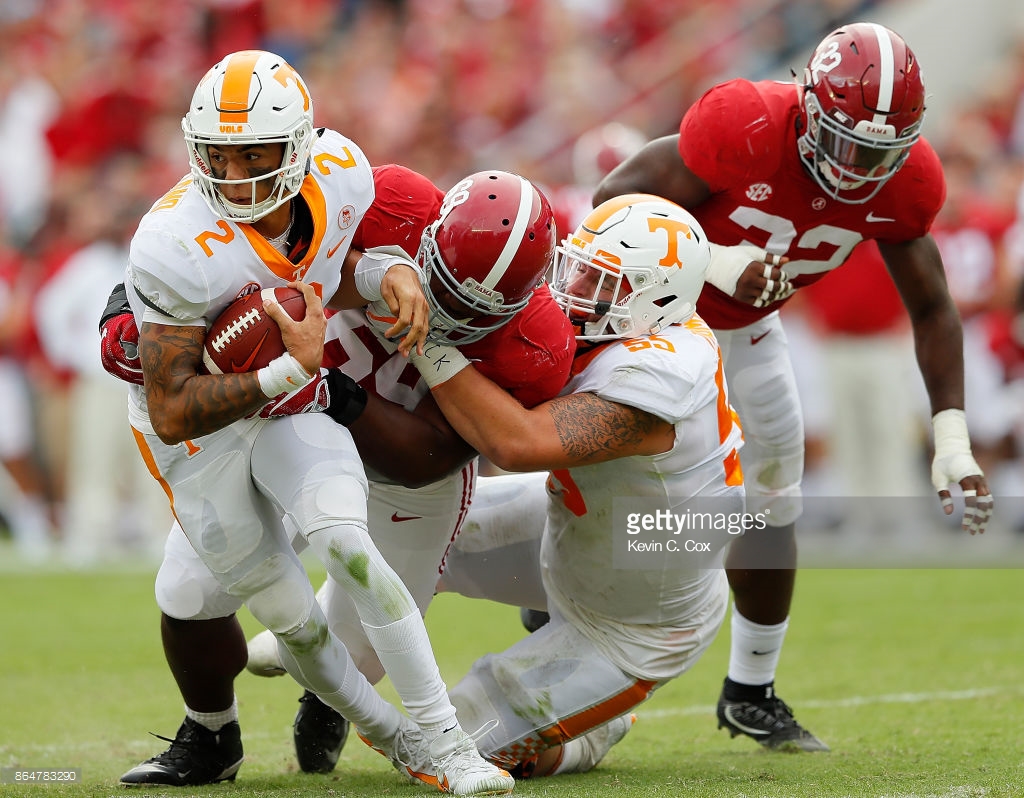 The Pittsburgh Steelers kicked off their annual pro day tour this year with an early March trip to Tuscaloosa, Alabama to see a number of former Alabama players go through the paces. The Steelers had a large contingent at that pro day and not long after the group had all left town, word started to leak out that a dinner with several players the night before the annual event had taken place and that defensive tackle Joshua Frazier was present for it. Ever since Frazier tweeted out that pre-pro-day dinner news, it made it real easy to mock him to the Steelers late in the draft and especially since his former defensive line coach Karl Dunbar is now the Steelers new defensive line coach.

This past Saturday evening, the Steelers closed out their 2018 NFL Draft by selecting Frazier in the seventh-round with the 246 overall selection and right after that pick occurred, Dunbar talked about the player he already knew quite a bit about prior to the team picking him.

“A big body,” Dunbar said of Frazier, who reportedly ran the 40-yard dash in 5.27-seconds at his March pro day. “Six-foot-three, 320-pound guy. [I] think he’s strong at the point [of attack], he can push the pocket and the good thing about it, I coached him the last two years.”

In those last two years at Alabama, Frazier registered 23 total tackles and a sack to go along with 3 total pass breakups. While Frazier exits his college career at Alabama having not been a starter and only playing sparingly at times during games, Dunbar still thinks he has upside and that he would have likely played even more over the course of the last four years if not for an untimely injury.

“He was highly talented. I think he was a five-star kid out of Arkansas and he played a lot in his freshman year until he got hurt the second year,” Dunbar said of Frazier. “And that’s when Da’Ron Payne came in and took over that job. So, it’s the luck of the draw sometimes when you go to a team that has a lot of talent. It’s almost like, some people say, that Wally Pipp story – he took a day off and never got his job back. So, hopefully this kid can do some things that we think he can and it’ll be fun coaching him again.”

Frazier’s job now that he’s a member of the Steelers is to potentially push for a sixth defensive line spot on the final 53-man roster. Last season, Daniel McCullers once again held that spot all season even though he didn’t ultimately dress for many games. Frazier was primarily used a base 3-4 nose tackle at Alabama where he was often asked to take up two blockers. Dunbar talked more about Frazier’s strengths as a player on Saturday during his short media session.

“I think he’s a big, strong kid. He can demand two blockers,” Dunbar said of Frazier. “He had a sack for us [Alabama] in the first playoff game against Clemson. He had a sack last year against Washington. So, I mean he’s a big, athletic kid who, you know, you can’t find a lot of them, and when you do, you got to take advantage of it.”

Midway through Alabama’s 2017 season that ultimately culminated in a National Championship, their head coach Nick Saban talked glowingly about Frazier.

“I think Josh is playing the best football he’s played since he’s been here,” Saban said during an October press conference when asked to talk about how Frazier had progressed at that point of the 2017 season as well as his entire career. “I think he’s in better shape. Josh is really a run stopping nose guard type guy for us who plays a lot more when we play against regular teams, which these guys are in regular a lot, which means we play regular. We play some in nickel. We don’t play him a lot in pass rush situations. When he’s gone in there he’s done a good job for us. He’s someone you can count on to do exactly what you expect to get from him. He’s done a good job from that standpoint.”

Dunbar was asked Saturday to name the things that Frazier will need to work on now that he’s at the NFL level with the Steelers.

“I would say just being a pro, coming to work everyday,” Dunbar said. “He doesn’t have to worry about school anymore. And getting along with the kids and the men in the locker room. I think those kinds of things that – I mean – because I think anything else I say about the kid, you’re basically talking about me, because I coached him for the last two years. So, I just think, you know, the things that we’re going to teach and going to emphasize for him, I think is going to help him be a better football player.”

As for Frazier, he said after the Steelers selected him that he has no hard feelings about how his college career at Alabama ultimately transpired with him never being a starter.

“I have no regrets,” Frazier said during his conference call with the media. “Things turned out the way they did. [Da’Ron] Payne is Payne in his own right, but I feel I have some of the same traits that he brings to the table. Once I got out there I took advantage of my opportunities and it got me to this point right now, and I’m just ready for this new chapter in my life.”

Da’Ron Payne, who was referenced a few times Saturday night, first by Dunbar and then by Frazier, was selected Thursday night in the first-round of the 2018 NFL Draft and thirteenth overall by the Washington Redskins.

The selection of Frazier Saturday night, by the way, broke a long running draft streak related to the Steelers as you have to go all the way back to 1998 to find a player drafted by Pittsburgh who played collegiality at Alabama.

“And of course he worked with Coach Dunbar down there [at Alabama], so we have an extra familiarity,” Steelers general manager Kevin Colbert said Saturday night after the selection of Frazier. “But as a defensive lineman, he can come in and he can compete and push the people we have.”