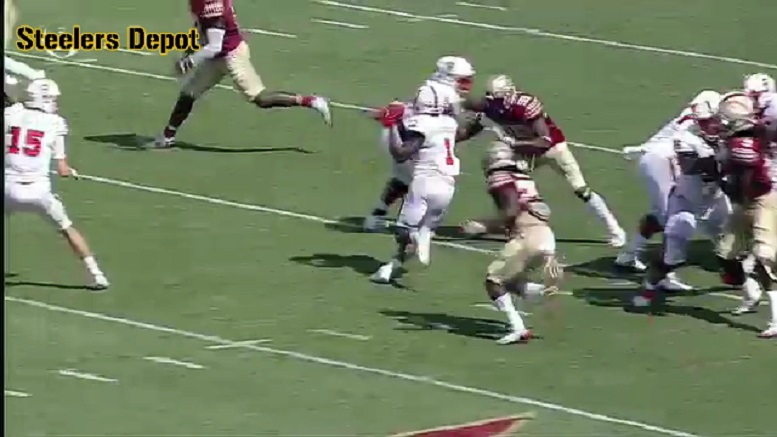 With the second of their two fifth-round picks, the Pittsburgh Steelers selected N.C. State running back Jaylen Samuels. Labeling Samuels as just a running back would be eliminating his value as he has lined up as a slot receiver, tight end and in the backfield during his time at North Carolina State. Though Steelers running back coach James Saxon confirmed that he will work with the running backs, he also hinted that Samuels is going to be a versatile weapon.

Saxon is not lying. Like a chameleon, Samuels has settled into every environment he has been put into. While it seems that he will be pegged in as a running back, Saxon offers that Samuels will get every opportunity do a lot of different jobs. Though it would likely take the rest of the offseason to dive into every such job that Samuels has could be asked to perform, let’s jump into one now.

The Steelers have grown fond of the shovel pass, especially over the course of last season. The team utilized the trick play in situations that would typically catch their opponent off guard. Short yardage, red zone, third down, fourth down were all areas where the team used the unsuspecting shovel pass. The shovel pass is just one area where Samuels and the Steelers can join common interests as the N.C. State running back show success running the shovel pass in college.

Here’s that versatility in motion. Samuels, lined up as a tight end on the right side of the line, runs underneath the line of scrimmage, receiving the shovel pass for an easy touchdown. Lined up at tight end but running like a running back, you can see why the N.C. State playmaker was difficult for opposing teams to account for. Samuels in purest terms is a matchup nightmare.

Samuels, lined up behind the outside shoulder of the furthest lineman on the N.C. State line stands set to perform an undercover job. As the ball is snapped, Samuels drifts across the line of scrimmage without any of the South Alabama defenders picking him up. The quarterback has an option to pitch it outside or inside and he wisely chooses inside where Samuel receives the shovel pass and takes it for six.

Consider the two shovel passes Samuels received at N.C. State and now compare it to the shovel passes the Steelers ran last season below.

Facing fourth down and in the red zone, the Steelers find the perfect opportunity to get creative and use the shovel pass. Tight end Xavier Grimble is positioned similarly to Samuels, behind the outside shoulder of the furthest lineman. At the snap, he drags across the line of scrimmage while Ben Roethlisberger keys in Packers linebacker Nick Perry before shovelling it home to Grimble for the touchdown. It is an identical play to the one the team used to get JuJu Smith-Schuster a touchdown against the Vikings in week two. More importantly, it is a play that almost never fails and one that Samuels can be packaged into due to his versatility.

The one area of concern anytime you design packages around a certain player is predictability. It is one of the reasons why other acts such as Chris Rainey and Dri Archer failed, as teams knew what was coming anytime they stepped onto the field, they also were not built for NFL punishment as well. With Samuels’s size (6’0, 225 lbs), you won’t have to worry about his toughness and with his consistent production at numerous positions, the fear of being predictable decreases as well.

Samuels may be asked to do all sorts of jobs for the Steelers, and his involvement in trick plays such as the shovel pass may be the most intriguing of all.