The 2018 NFL Draft is approaching fast and the list of shortlisted names for the Pittsburgh Steelers to select with their first-round pick has drawn on a few favorites. The names include some positional diversity with Leighton Vander Esch and Rashaan Evans at inside linebacker and Justin Reid at safety. One name that initially came as a surprise is LSU running back Derrius Guice, who has received plenty of interest from the Steelers this spring.

The thought of drafting Guice, or let alone a running back, in the first round may seem surprising. Barring unforeseen circumstances, the team should have Pro Bowl running back Le’Veon Bell under contract for at least one more season and there are more immediate needs present. While you would not be a fool to argue that there are bigger needs, such as linebacker or safety, you would be foolish to argue that the Steelers can bypass Guice and select a running back later. Should the team ultimately choose to draft a running back this year, it will likely be Guice or bust.

Before jumping into the study, let’s try to clear the air. It does not seem that the Steelers have interest in adding another running back in a back up role. The team has brought in just one running back on an official visit, Reggie Bonnafon from Louisville. Not to mention, James Conner was drafted in the third round just last year for that very reason. With a third-round pick already invested in backing up Bell, it seems that if the Steelers are going to bite on the running back position, it’s going to be for a full course meal.

There have been many narratives constructed of the running back position, the biggest being that running backs are simply a dime a dozen. A team can grab a running back late in the draft, plug him in and the offense will quickly forget the existence of their previous running back. It is a narrative that many have used to argue against Bell and his contract demands. The only problem is that history has told us that this narrative is completely false.

The higher you are selected, the better the chance of a long, successful NFL career. This holds true for running backs as well, as those drafted early in the draft process have shown a higher likelihood for longevity than later round selections. Compiled below is a list of every running back drafted from 2011-2013, their total rushing yards and number of 1000-yard rushing seasons. Setting the cut off at 2013 gives a five-season minimum to work with when looking at a running back’s body of work. 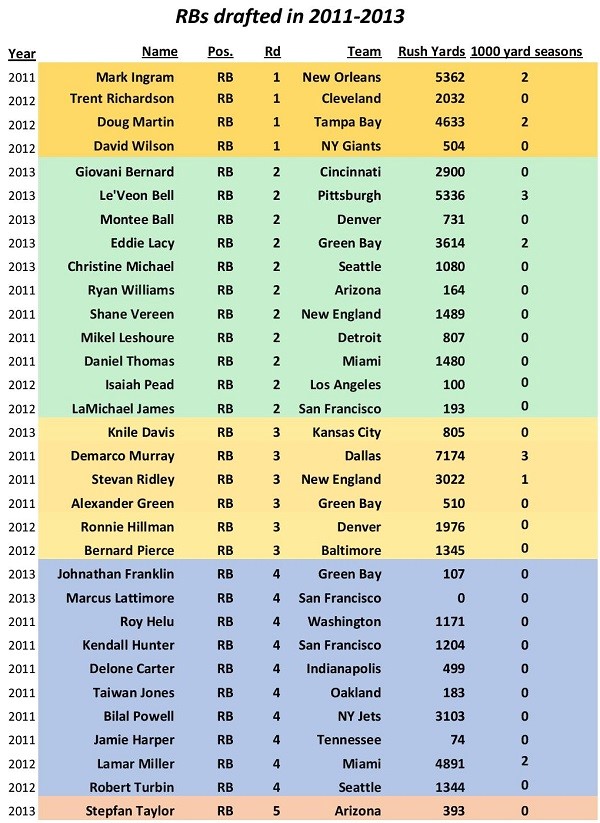 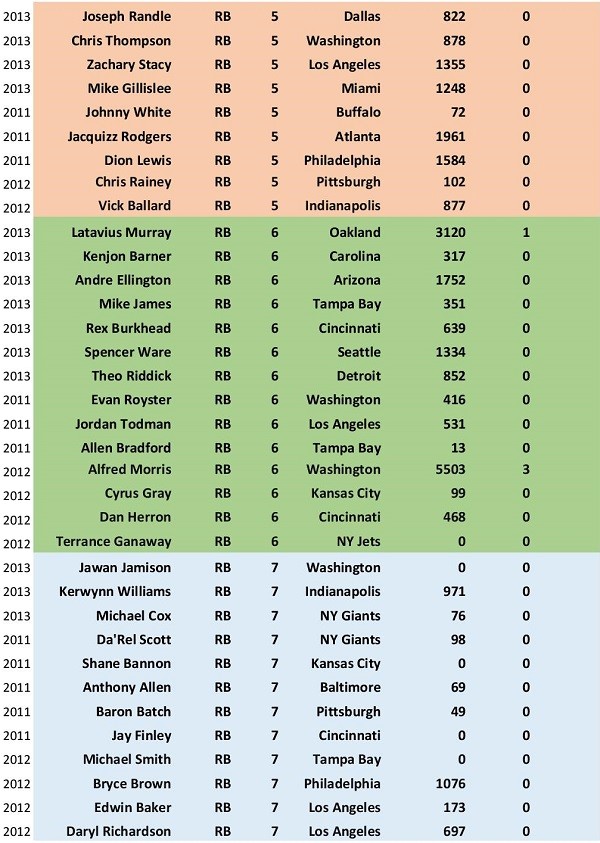 The cream still rises to the top when it comes to running backs and their draft position. There have been four 1000-yard seasons from first round picks, five from second round picks and four from the third round. From there the results get sparser, just two 1000-yard seasons in the fourth and fifth combined and though there are four such seasons in the sixth round, three come from Alfred Morris who has not eclipsed 1000 yards since 2014. There are also many more zeros as the list progresses, showing that it is rather rare to find a workhorse running back late in the draft. For every diamond in the rough such as Lamar Miller, there are more than a dozen throwaways such as Johnathan Franklin.

Another interesting observation is that the five 1000-yard seasons from the second round come exclusively from Bell and Eddie Lacy in 2013. There were no first round running backs taken in 2013 and Bell was the second running back off the board, making him a top star of that year’s running back class.

Bringing this back to Guice, if the Steelers want to hit a home run in finding a running back, they are going to have to swing early. This seems to be the team’s strategy as well as Guice has been the only notable running back the team has shown interest in, meeting with the LSU back at the NFL Combine and dining with him after his pro day. Should the Steelers not select the talented LSU running back, they are better off taking a walk and giving it another swing next year rather than adding a running back later in the draft.