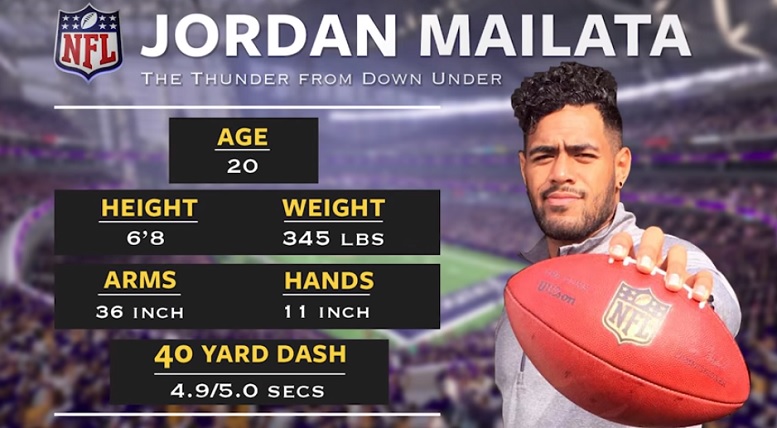 Australian NFL draft hopeful Jordan Mailata reportedly has quite a few visits lined up after impressing scouts at a pro day in Tampa, Fla. a few weeks ago. According to Gil Brandt of NFL.com, Mailata, who reportedly measures in at just shy of 6-8 and 346-pounds, is currently scheduled to visit the Pittsburgh Steelers on Tuesday.

Another name to watch: Aussie Rugby player Jordan Mailata (6-8, 346) who's attempting conversion to football. Has visits lined up every day this week:

At his recent pro day, Mailata, who played professional rugby for the South Sydney Rabbitohs, was timed at 5.12 seconds in the 40-yard dash. He also posted a short-shuttle time of 4.67-seconds and put up 22 reps on the bench press. Those numbers would have put in him in great company at this year’s scouting combine when compared to the tackles that were invited to participate in Indianapolis.

Mailata is a 20-year-old of Samoan origin and it will be interesting to see if a team winds up drafting him in the late rounds this year. The Steelers have a history of developing over-sized players and current starting left tackle Alejandro Villanueva is a perfect case-study for such. Villanueva spent a season on the Steelers practice squad after being released as a defensive lineman by the Philadelphia Eagles.

He’s never played a down of American football, but former Australian rugby player Jordan Mailata is trying to make the transition to the NFL.

His story on #UpToTheMinute ⬇️ pic.twitter.com/iFkiwT9q71