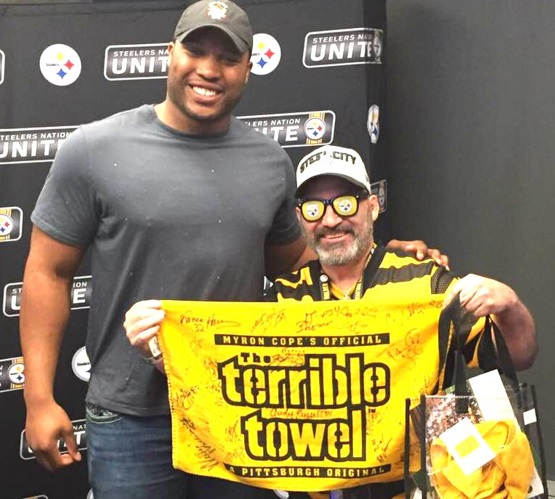 As an average Steelers fan; in years past I would wait patiently for the latest Steelers draft picks to be announced, trusting in the management to make the best decisions while jockeying for position to bring the players that best fit into the Black & Gold fold. I confess to having never watched the NFL draft coverage on television and taking little interest in who other teams drafted.

I guess it is akin to flying commercially; which is an irrational act if you think about it. Yes, air travel is one of the safest modes of transportation but consider this: When you fly, it entails entering an aluminum tube with hundreds of complete strangers. You are squeezed into tiny seats with so little personal space between you and the stranger next to you it would make the most intimate of married couples blush.

You and the mass of strangers are then propelled into the air by jet engines – just one has as much as 115 thousand pounds of thrust. Add in the fact, that the aluminum tube is pressurized and that only .039 inches (less than one millimeter for you metrics fans) of fuselage skin as specified by the aircraft manufacturer, separates you from an atmosphere that is cold: -40° F to -70° F (-40° C to -57° C) at the typical cruising altitude of 30,000 feet.

This thin-skinned tube hurtling through the sky at a cruising speed of over 500 miles per hour is operated by a couple of people you have never met and likely won’t see until they thank you for flying with them as you get off their ride. We put our complete trust in them and don’t second guess what they are doing. Our job above all else is to remain seated with our seatbelts fastened and remain calm even after your stomach ends up in your throat after that last bit of turbulence… stay calm, really?

When placed in this context, I believe Steelers fans are acting quite rationally when it comes to the draft. Let’s get to know who all these people are. Let’s learn as much about the process as we can. Let’s double check and make sure the people operating this thing, the Steelers draft in this case, know what they are doing. And to borrow a phrase from our Homeland Security Department: “If you see something; say something.”

My excursion with the Steelers draft was completed in a few days culminating in the Steelers Fan Blitz Draft Party at Heinz Field on Saturday. Like any trip, some preparation is required. Steelers Depot provided plenty of coverage on the college draft prospects and the needs of various teams which I read voraciously. I entered the Steelers Depot Mock Draft Contest which got me studying potential picks by the Steelers.

With the 28th pick in the 2018…#MockAMania18 Mock Draft,@IsadoraKemper10 &
The Pittsburgh Steelers select:
Leighton Vander Esch, ILB, Boise State@DRED122427 are now On The Clock…. pic.twitter.com/Ng7nZfTWxq

Thursday night; I monitored the draft from my laptop and phone. The Penguins playoff game was of course on the television. My wife Sue, keeping me apprised of the hockey situation. The First-Round Discussion thread had nearly 2000 comments (1993). The most liked comment did not even involve a pick. It was Don’t Poke the Badger saying, “Steelers drafted M. Bryant in the 4th and got a 3rd for him with all that baggage, low production and some bad attitude last year? I’ll take it! I think the Steelers will draft a WR in the first three rounds.”

And NinjaMountie, I did verify that you correctly predicted that, “Penguins are going to win. Score 3 in the 3rd….calling it.” When they were being shut out.

Darth Blount47 captured the initial mood of many once the Steelers finally selected made their first-round selection: “This is the most perplexing 1st round pick of the Colbert ERA. Hands down. I like Edmunds. As a 3rd rounder. Maybe 2ND.”

The big news; the Steelers select a safety and acquire an additional third round pick by trading Martavis Bryant to the Oakland Raiders.

The Day-Two Discussion Thread was led by StarSpangledSteeler who betrayed unabashed optimism with “After the Steelers recent history, I refuse to doubt any WR we draft.”

While Gberg51 was starting to get used to Edmunds as the 1st round pick: “Just goes to show the front office knows way more than we do. I still think Edmunds was a reach, but for everyone clamoring for Reid and Harrison instead, they’re still hanging around. Don’t think Edmunds would’ve made it through the 2nd.”

So far, a safety and a wide receiver. With two picks in the 3rd round, the Steelers had plenty of prospects for an inside linebacker. Yet the team had different thoughts. A quarterback and an offensive lineman. Three of the top four picks are on offense not defense. Yoi.

I did not participate in the Day-Three Discussion Thread since I drove up to Pittsburgh to attend the Steeler Fan Blitz Draft Party. However, I perused some of the top comments. Steeldog22 discussed the lack of linebackers and the two safeties that were drafted: “We have to be planning some serious money-backer sets. I love the idea. I doubt the coach’s ability to implement. Well Willcox can start packing.”

While Kevin Schwartz tried to put the whole draft in perspective; “Welp, I like 2 of our 6 picks, will give them the benefit of the doubt on 2, and am kind of perplexed about 2.”

The four draft picks from day 1 and 2 of the draft were there. I live tweeted Terrell Edmunds, Mason Rudolph and Chuk Okorafor while they answered some questions:

James Washington arrived a little later and was mobbed on the field.

Out on the field kids and grown-ups tested their skills at catching punts, kicking field goals and passing. Really a very nice time. The lines were long to get autographs but a very great way to get up close to the men of steel.

The theme of the draft party was, “The Future is Now.” The question is does this year’s Steelers draft address the future now? Here is an average Steelers fan’s take:

Terrell Edmunds – Considering Rashaan Evans and Leighton Vander Esch were gone; it was not surprising that the Steelers picked a safety. It was just the safety chosen that was a surprise as myself like many others had considered Justin Reid, Bates Jessie III or Ronnie Harrison (my choice for the 1st pick) ahead of Edmunds. NFL history was made since he and his brother Tremaine were the first brothers to be picked in the first round of the same draft. I believe Edmunds will be able to contribute in 2018 – the question is how he will be deployed and how much playing time will he see. I plan to track him and the other safeties using the following chart this season:

James Washington – The selection of a wide receiver made sense once Martavis Bryant was traded. I’m not sure he improves the roster as he is essentially a replacement for another talented receiver. If Washington can come close to Bryant’s 50 receptions last year – let’s say 40-45 – and significantly improve on the yards per reception from Bryant’s 12.1 to something beyond 15 yards per reception, then the Steelers may have found someone that can take the top off the defensive coverages. He should be a contributor in 2018.

Mason Rudolph – Selecting a quarterback with the pick that Bryant traded for was outside the realm of most people’s thinking. Inside linebacker was the conventional wisdom for this pick. Well for those that say that Kevin Colbert is conservative; this pick was way outside the box. Unless something dramatic happens ala the 2004 season; the closest Mason will get to the field will be with a clipboard. I do not see him contributing in 2018 and anxiously await Latrobe so that I can see how he stacks up throwing next to Landry Jones and Joshua Dobbs.

Chukwuma Okorafor – Draft analyst Lance Zierlein noted this on his NFL draft profile, “Scouts complain he’s ‘big and nice’ when he needs to become ‘big and nasty.’”  While, Mike Mayock says, “The question is, can you light a fire under him?” Will Chuks be an offensive line version of Dan McCullers or can he be developed into a nice on the street mean on the field Javon Hargrave? Regardless, he is a developmental player for the future. He did not make Gil Brandt’s list of top 150 draft prospects. I do not understand why the Steelers would make two picks in the 3rd round that are unlikely to contribute in 2018.

Marcus Allen – Another big safety who is known for tackling. Could the picks of two such safeties be a signal that the Steelers are looking to shift to an amoeba type defense with more emphasis on defensive backs that can come up and play in the box rather than linebackers that can fall back into coverage? Three safeties and a middle linebacker instead of two inside linebackers? Marcus may also be a demon on special teams to help make up for the loss of Robert Golden and perhaps even make JJ Wilcox dispensable. He could be a special teams contributor in 2018.

Jaylen Samuels – Jaylen does not have the pedigree of Derrius Guice (5’11”,224 lbs) or Nick Chubb (5’11”, 227 lbs) but at 6’0”, 225 pounds with comparable speed he may have potential. A knock in some of the scouting reports was that he was too versatile – a jack of all trades but master of none. However, versatility is something the Steelers value and may see him at least make the practice squad. With Le’Veon Bell and several veteran back-ups at running back, I do not see him making much of a contribution in 2018 but let’s see how he develops perhaps ending up on the practice squad unless Danny Smith successfully lobbies for him.

Joshua Frazier – Karl Dunbar like Mike Munchak got a player to develop. Frazier played for Dunbar at Alabama, so they will be familiar with each other. He has good size but was overshadowed by Da’Ron Payne. It will be interesting to see how the camp battle between he and McCullers goes.

I don’t think it is a bad haul, just have that feeling it could have been better. All have a fair shot at either making the 53-man roster or ending up on the practice squad. However, I only see three of the picks making immediate contributions to the Steelers success while four are developmental projects whose contributions lie somewhere beyond 2018. Yet, the theme of this year’s draft party was; “The future is now.” I think the Steelers hedged a bit.

Well, I’m going back to researching my Steelers history; will get back to the present a little later. Oh, and by the way. I did not watch any of the NFL draft coverage on television. Maybe next year. I’ll leave you with this musical gem; Desmond Dekker & the Aces performing Israelites.