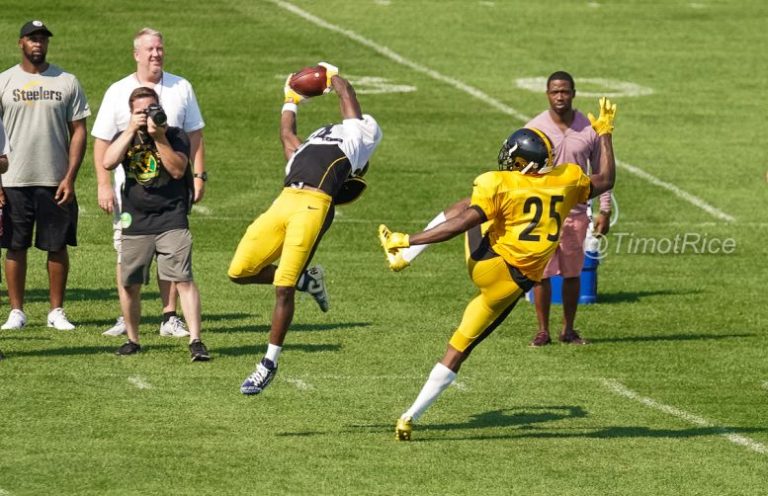 Even before Darryl Drake was hired by the Pittsburgh Steelers, we knew his thoughts on Antonio Brown. Best receiver in the NFL. The “baddest dog in the league,” were his exact words. Now, he gets to coach the top one in the NFL. For Drake, the mission is about trying to take his game, as unbelievable as it may be to imagine, to new heights.

That’s what he said sitting down with Missi Matthews for his first interview since being hired in the winter.

“To me, he’s the best,” Drake said when asked to evaluate his star pupil. “His work ethic sets him apart. He’s naturally gifted, he has an innate ability to catch the football and get open. Has such a great feel for the game. As far as his production, it speaks for itself. The things he’s done over the last few years, he’s always at the top of the class. And as I look at film, I see him doing things that can’t nobody else do. He makes the one he’s supposed to make and he makes the ones nobody else makes.”

Drake inherits a strong receiver group at the top and in the interview, gave a nod to Richard Mann for the job he had done. There’s Martavis Bryant, still full of potential, JuJu Smith-Schuster’s sensational rookie season, and of course, AB.

At this stage in his career, it might feel like Brown doesn’t even need to be coached. But Drake’s goal is to keep pushing him hard.

“It’s my job just to continue to help him to grow, to be the best that he wants to be. And he really wants to be great. And he’s well on his way.”

Brown, who believe it or not, turns the big 3-0 this July, could retire today and be a first-ballot Hall of Famer. Despite missing two games last season, he led the league in receiving yards with 1533, which is still only the third most he’s ever put up in a year. He’s going to shatter all of the Steelers’ receiving records; it’s not a question of it but when.

For his career already, he’s tallied up 733 receptions, 9910 yards, and 59 touchdowns. He’s the best in the world. And that’s definitely going to make Drake’s job a little easier.