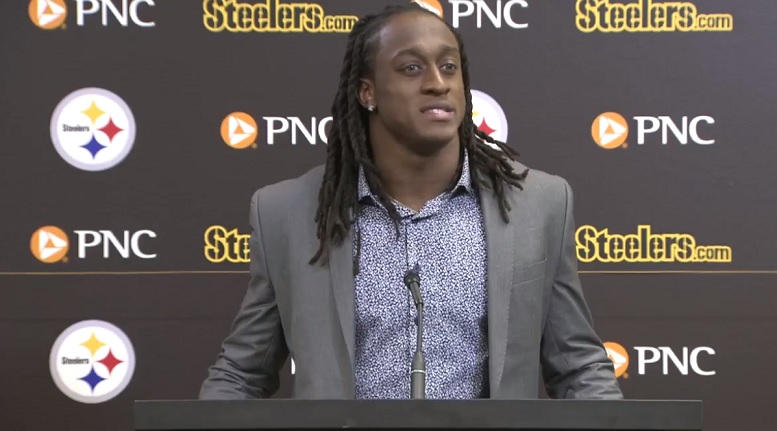 A left shoulder injury that he initially suffered last spring couldn’t keep new Pittsburgh Steelers safety Terrell Edmunds off the field for most of his 2017 season at Virginia Tech. While he reportedly played injured in 10 games during the 2017 season, the torn labrum that he had reportedly been dealing with eventually got the best of him and thus needed to be surgically repaired this past November.

During his Friday afternoon introductory press conference in Pittsburgh, Edmunds, the Steelers first-round selection in the 2018 NFL Draft, was asked if his repaired shoulder will limit him in practices in any capacity this offseason.

“No sir,” Edmunds replied. “I was actually a cleared maybe about a month ago, you could say, and everything’s a hundred percent. They said I’m good for contact and everything. So I’m ready to go.”

“Our doctors are very comfortable with where he is, and again, for him to play as good as he did last year with an injured shoulder was impressive for us,” Colbert said of the condition of Edmunds’ shoulder.

Edmunds, who is only 21 years of age, is regarded as a very hard worker both on and off the field. Virginia State head coach Justin Fuente reiterated that just ahead of the school’s 2017 season getting underway.

“I think athletically, he’s just different. He’s an incredibly hard worker but I’ve never seen a guy that can’t get tired. He doesn’t,” Fuente said. “We know about the family, just great people in general, but there’s just something different about him. His stamina, his strength, his work ethic, his intelligence. He’s pretty special. When they go run in the summertime and we go do things and you’re playing games and he’s covering punts and playing safety and covering kickoffs, he’s the fastest guy out there every single time, every single rep, it’s pretty fun to watch.”

We’ll now look forward to watching Edmunds’ career with the Steelers get started as a participant in the team’s quickly approaching rookie minicamp.