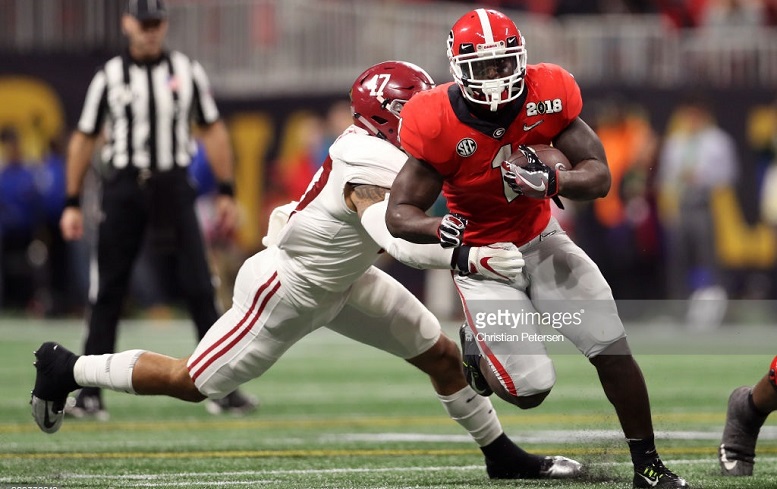 NFL Network draft analysts Mike Mayock released his annual mock draft Wednesday night on television and he has the Pittsburgh Steelers selecting Georgia running back Sony Michel with the 28th overall selection in the first-round of the 2018 NFL Draft.

I’ll update Mayock’s full quotes on the selection of Michel after I transcribe them, but you might be interested to know that he chose the running back over Boise State linebacker Leighton Vander Esch. Mayock later stated that he left Vander Esch out of his mock because of medical concerns about the linebacker’s neck. Additionally, Mayock had mocked Alabama linebacker Rashaan Evans to the Tennessee Titans with the 25th overall selection.

“Leighton Vander Esch, one of my favorite players in this draft, has a cervical issue,” Mayock said. “I know a lot of teams have him off the board. Some have discounted him, and some say he’s ok. I hope he goes in the first-round because I think he’s a heck of a football player. More importantly, I hope he stays healthy.”

For what it’s worth, Steelers general manager Kevin Colbert did attend the Georgia pro day in March. The Steelers, however, really didn’t seem to show too much interest in running backs during the pre-draft process outside of Derrius Guice and Kalen Ballage. Mayock, by the way, has Guice going to the Philadelphia Eagles with the last pick of the first-round.

The last time the Steelers drafted a running back in the first-round was in 2008 when Rashard Mendenhall was selected 23rd overall out of Illinois.

His full mock draft can be viewed here.