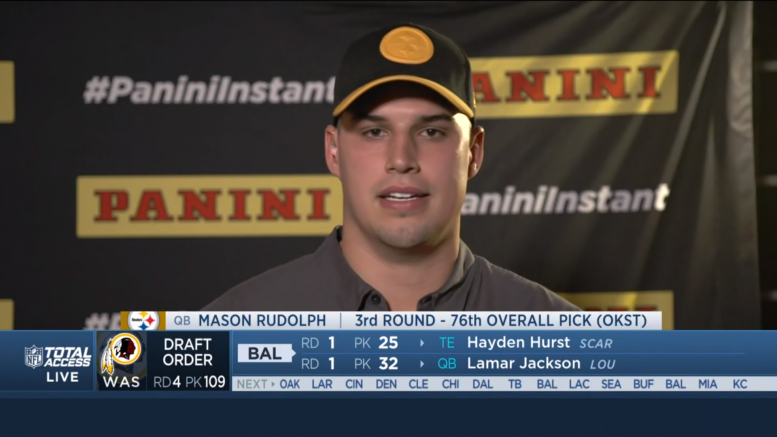 Things have been happening fast and furious over the course of the past few days, understandably, which is actually a good thing for us because we are going to be spending a lot of the next several weeks without much new to talk about. So we’ll be using this time to mine over the vast resources given to us over the course of the draft weekend to feed your need for Pittsburgh Steelers information.

One of the things we didn’t get to talk about was a pretty illuminating albeit short interview segment that the NFL Network held with quarterback Mason Rudolph shortly after he was selected by the Steelers in the third round on Friday. He showed a lot of fire that I think people are going to love.

Rudolph was one of six quarterbacks in the 2018 NFL Draft that many believed could be selected as early as the first round, but he was the only one of the six that was not. He even slipped out of the second round and nearly into the middle of the third before Pittsburgh jumped up to get him.

Possibly alluding to Josh Rosen’s comments after he was taken with the 10th-overall pick by the Arizona Cardinals as the fourth quarterback off the board, Rudolph was asked how he felt about sliding so far and seeing the other quarterbacks picked ahead of him.

“I’m not going to make any outrageous statements about [how every team made a mistake passing on me], but definitely, when I look at the other [quarterbacks drafted ahead of me] I just had to wince every time I heard their name”, he said, “because I feel like I stack up a whole lot better than all of them and I bring a whole lot more experience and a whole lot more character to the table”.

That might not have been quite the company-line answer they were expecting to hear when they asked the question, but they really didn’t get the answer they were clearly fishing for when asking him if he agreed that coming in and being able to sit and learn behind Ben Roethlisberger was an ideal situation for a young quarterback.

Before even beginning to answer the question you can see that he took umbrage to the suggestion, wincing as though he just heard another quarterback named ahead of him. “You know, I felt like whatever situation, whether it was a team where I would start day one, I could’ve done that, and I could’ve done it at a high level”, he started in response.

He finished up by saying that he was going to get his hands on the playbook the next day and do “everything I can to prepare like I am a starter. It’s my job to learn the offense as quick as I can”, he told the host, “and make the most out of whatever reps I get.

Rudolph is joining a deep group of quarterbacks that also includes veteran backup Landry Jones and last year’s fourth-round draft pick, Joshua Dobbs. He will almost assuredly knock one of them off the roster as he competes for the backup role his rookie year.