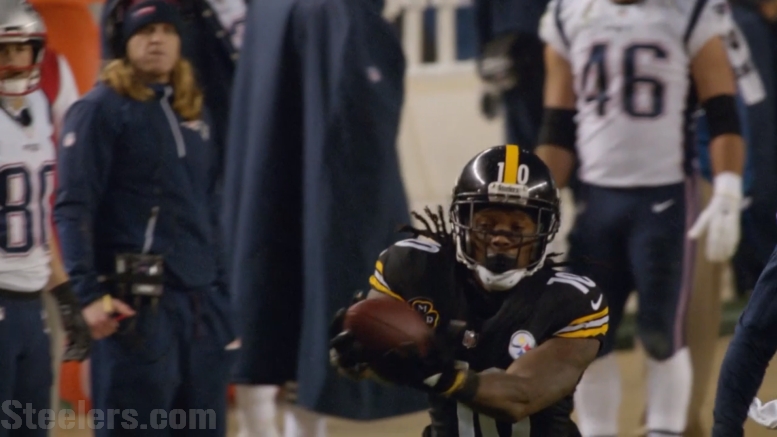 This is no longer Pittsburgh Steelers news, but I guarantee you Pittsburgh Steelers remain interested. Former black-and-gold wide receiver Martavis Bryant spent his first full day out west yesterday after being traded to the Oakland Raiders for a third-round draft pick and spoke to the media about his new opportunity.

“It’s a blessing and an honor. It just shows that [the Raiders] kept faith in me and they got faith in me, and also that I believe in myself”, he said. “Things aren’t going to be easy, things are always not easy, but you’ve got to just keep fighting and keep working, and I’m going to be all right. I’m going to handle my business, come to work here and prepare and go out and handle my business as a man”.

ESPN’s Jeremy Fowler spoke to Bryant the night he was traded. He told the reporter that he was prepared to play out the year and be a good teammate if he were not traded, and that he will always have lot for the Steelers, but that he called the move to a new team “a blessing”, which he obviously reiterated in his statements to the Oakland media.

“I’ve got a lot to prove”, he went on. “I don’t want to be just a one-dimensional player. I have a lot to work on, all aspects of my game. I’m going to do that, just to prove to myself that I can be great”. The former fourth-round pick struggled to reintegrate into the Steelers’ offense last season following a year-long suspension.

Bryant may well be one of the most physically gifted wide receivers in the entire league with a remarkable size-speed-weight ratio, but he knows as well as anybody that he has yet to put everything together, and he must be aware that his 2017 season was a far cry from what he should be capable of producing.

I do not believe that the Steelers were openly interested in moving Bryant, but it would have been foolish of them not to listen to offers, especially when you are talking about a player who has actually gone so far as to request a trade. You generally don’t want to have players who want to be on another team on your own team.

Even if Bryant in 2017 was not the same player as he was in 2015-6, his absence did leave a void in the Steelers’ offensive lineup that they are hoping to shore up with the drafting of James Washington in the second round of the 2018 NFL Draft.

Pittsburgh has now used second-round picks on the wide receiver position in back-to-back years. From 2007 through 2016, they had only once used a pick earlier than the third round on a wide receiver, that being for Limas Sweed in 2008. Instead, they found success from the third to sixth rounds, even in undrafted free agency.